Hundreds of locals took the the hills of Bedwell Bayfront Park in Menlo Park this morning to watch the Space Shuttle Endeavor fly overhead on its final voyage, ending two decades of service. It was mounted atop its 747 Shuttle Carrier Aircraft.

The orbiter took off from Edwards Air Force Base at 8:15 am, about an later than originally planned. NASA, the California Science Center, and the Federal Aviation Administration delayed the start of the flight to increase the probability that fog over the Bay Area would dissipate before the flyover.

“The flight delay paid off locally,” said Scott Loftesness, who’d was among the crowd at the Park. “The sky was bright blue. At first the Shuttle was coming right at us, but it made a slight turn. The light was just perfect.” 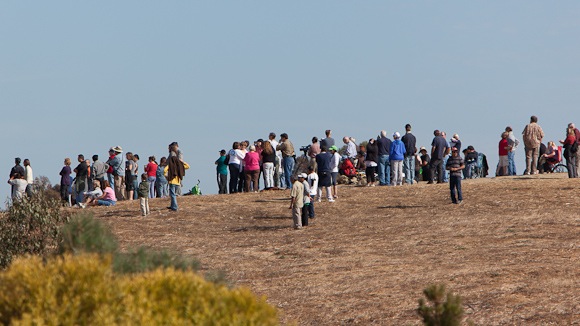 One aftermath of the flyover was a massive traffic jam getting out of the Park. “There were cars parked everywhere, and, of course, everyone left at the same time,” said Scott.

After leaving the skies over Menlo Park, Endeavor passed over NASA’s Ames Research Center and Vandenberg Air Force Base before heading south to Los Angeles International Airport where it landed shortly before 1:00 pm.The orbiter will be transported to the California Science Center next month.