How synchrotron-generated X-rays saved one of King Henry VIII’s warships is SLAC public lecture on Oct. 2 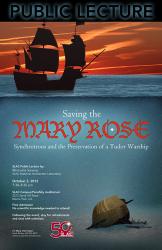 Ritimukta Sarangi, staff scientist in the Structural Molecular Biology group at SSRL, a subdivision of SLAC, will deliver the Oct. 2 SLAC Public Lecture, “Saving the Mary Rose: Synchrotrons and the Preservation of a Tudor Warship.”

Sarangi’s talk, which begins at 7:30 p.m. in Panofsky Auditorium, will explain how synchrotron-generated X-rays were used to help preserve a 500-year-old warship after it was salvaged from the bottom of the Atlantic in 1985.

The warship was the Mary Rose, built in 1511 and the flagship of King Henry VIII. She sank in 1545 while en route to confront the French fleet in battle. The ship lay undersea for 440 years before being raised, and her salvaging was not the end of her troubles. The restored Mary Rose is being constantly treated to preserve the wood structure, but in 2002 a new problem arose that began rapidly destroying the ship.

Sarangi will tell the story of how research at SSRL uncovered the cause of the problem and a way to help.  As Sarangi says, “This lecture will present the amazing story of archeology, chemistry, and physics that preserves this precious artifact and gives us a glimpse back into Tudor times.”

SLAC Public Lectures are free and last about an hour. Refreshments are served after the lecture, and guests have an opportunity then to speak with the presenter. This year’s Public Lecture series commemorates SLAC’s 50th anniversary and will include talks highlighting the future discoveries that lie ahead for research at the laboratory.

All are welcome, and you need not be a scientist to attend. Public lectures are intended for a general audience.