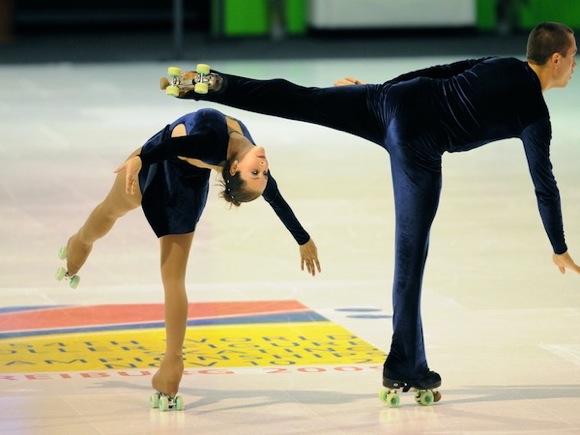 Aubrey Orcutt, Menl0-Atherton High Schools’ AVP secretary, has a hidden talent that came as a birthright. After roller skating her entire life, she qualified as a national competitor for the American Artistic Roller Skating team.

Orcutt started competing at the age of four. “I started going [to the rink] as soon as they got me out of the hospital,” states Orcutt. “That’s what you do… when your parents are working [at the Redwood City Roller Rink].”

About choosing skating as a career she says, “I was pretty much born into it, and when you’re one-year-old you don’t know to be interested in anything else. By the time I was old enough to be interested in something else, I had already started my career – I was already a national champion! You don’t give that up to change and become a beginner somewhere else…I kept on going!”

Her determination at a young age led her to one of her most memorable victories in 2009. Although Artistic Roller Skating is not in the Olympics, skaters have the opportunity to compete in the World Games. The World Games “is a major competition; its like an Olympic event for what’s considered class A sports but aren’t Olympic sports,” explains Orcutt.

Orcutt and her skating partner at the time, Robert Hines, took second place in the World Games. Technically, they came in first place by default, but Orcutt still considers it a second place victory.

She then competed for about 21 years before retiring in 2010. In the end, age and life caused Orcutt and Hines to stop.

“When you are competing at the level we were competing at, you don’t have much time for many things,” she explains of her hectic life of competition, “You can’t take vacations, because if you do you’ll fall behind. So in order to do other things, travel and what not, we had to quit skating.” However, the crazy schedule did not stop Orcutt from not achieving her dreams, “we had 10 years in the world team, we had a good run” says Orcutt with a smile, “we placed at the World Meet several times, we had a good record!”