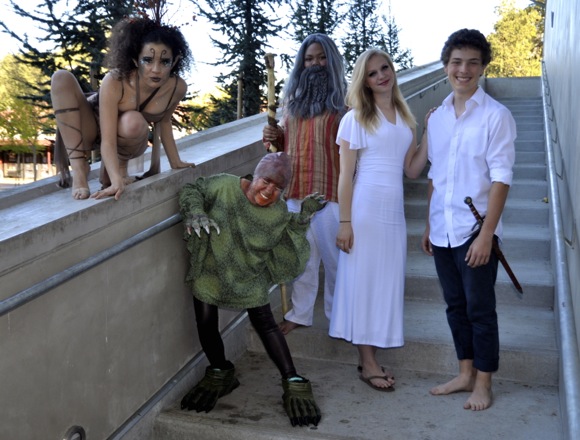 The Tempest by William Shakespeare will be performed for the next two weekends at the Menlo-Atherton High School Performing Arts Center, a production of the school’s drama department.

“It’s been four or five years since a play by Shakespeare was performed here,” said drama teacher Debra Zwicker-Sobrepena aka Ms. Z. “And that was staged in a classroom — this is the first time there will be a fully-staged production.

“I wanted a play that had enough roles for females. That’s not always easy when choosing Shakespeare. The Tempest is also a great mix of drama and comedy.” 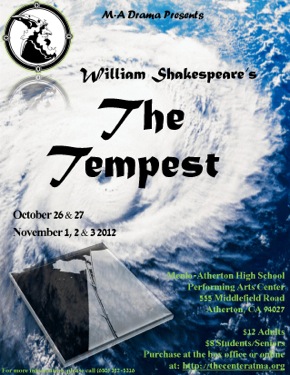 As we’ve done with past productions, we stopped by a dress rehearsal to hear what’s on the actors’ minds. Their responses match where they are in the photo, moving right to left.

Chris Macrae (junior) who plays Ferdinand in his first M-A production: “My favorite movie of all time is Forbidden Planet, and it’s based on The Tempest. So when I saw that audition call, I decided I had to give it a try. It’s been an amazing experience with a fabulous cast and crew. We’re one big dysfunctional family!”

Hannah Berggren (senior) on playing Miranda: “It’s hard playing Miranda. Is shea ditz or just ignorant of the outside world? The challenge is to get the correct balance of her personality.”

Janet Pale (senior) who plays Prospero on being a female who plays a male: “This is my third production but the first where I’ve played a male character. I don’t see much of a difference, although I’m consistently having to think about dropping my voice to sound like the calculating wizard Prospero.”

Ariel Sullivan (freshman) who plays Caliban on being the new kid in the production: “I was a bit terrified at first. This is the biggest role I’ve ever had with the most people in a cast. The juniors and seniors are great — I love hanging out with them.”

Maddie Rostami (junior) who plays Ariel on why this a different kind of role: “I get to be a bit ridiculous and I like that! Ariel isn’t human, so there are less restrictions. I get to do ridiculous leaps and throw myself around a bit on stage. She’s very driven to achieve her total freedom.”