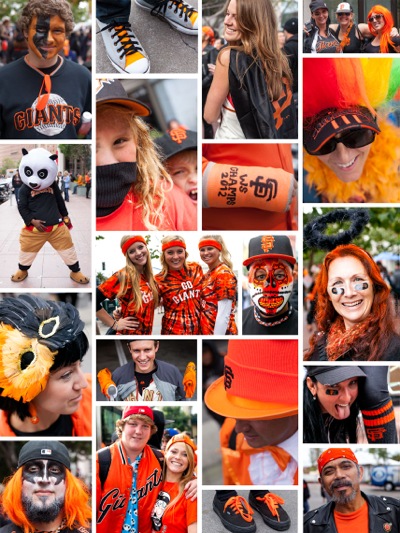 InMenlo photographer Scott R. Kline is not a lifelong San Francisco Giants fan — he grew up in Indiana rooting for the Chicago Cubs — but he’s been a follower of the men in orange and black since moving to the Bay Area in 1982.

He managed to catch a couple of playoff games against St. Louis and was there for the clincher in the rain, an experience he described as “incredible.” He didn’t attend either of the two World Series games played at AT&T, so wasn’t going to miss the victory celebration held on October 31 — all the better that it was Halloween.

Camera in hand, his goal was to come away from the experience with what he describes as “editorial street portraits.”

“I’m not a photojournalist,” he explains. “I always ask people if I can take their photo. The resulting photos are all about their style — how these people expressed themselves as San Francisco Giants fan in their unique ways.”