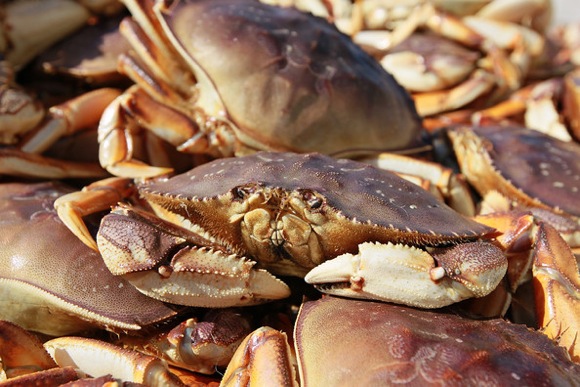 Editor’s note: The commercial Dungeness crab season began at the stroke of midnight Nov. 15, with crab arriving in local fish markets priced around $6.00. Last year the only way Menlo Park residents could serve crab for Thanksgiving was to catch it themselves, due to a delayed commercial season. But going crabbing can still be good fun even if not a necessity. Menlo Park-based writer Tim Goode, who publishes NorCal Fishing News, provides a rundown of  nearby options as well as crabbing regulations.

Plenty of excitement accompanied the opening of the recreational crab season two weeks ago, and the proof was visible on the Pacifica Pier (pictured below right), the best place in Northern California to catch crab from shore. Hundreds lined up on the pier with ring trap and snares. You can join them; bait and gear is available nearby at the Rusty Hook (650) 355-8303 or New Coastside (650) 359-9790.

For those interested in going out on a boat, the New Captain Pete in Pillar Point has been running two-a-day trips on weekends. Call (650) 726-6224 for current schedule and pricing. 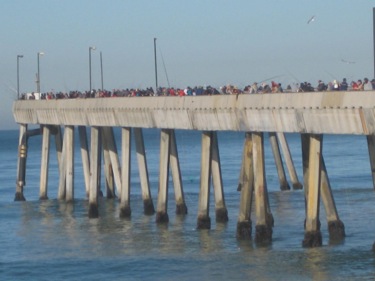 According to the Department of Fish & Game, Crab pots (or traps), loop traps and hoop nets are all popular methods for catching crab. New regulations this year require hoop netters to raise their nets to the surface to inspect the contents of the net at least every two hours. Any undersize crabs and incidentally caught fish and invertebrates can then be more quickly released.

The main purpose of the new regulation is to ensure that each fisherman closely monitors his or her gear and does not allow any equipment to be abandoned in state waters. Trap fishermen should also closely monitor their traps because lost trap gear can continue to fish and adversely impact the fishery by becoming a self-baiting crab killer.

Recreational crabbers may keep up to 10 Dungeness crabs per day, or six crabs if fishing from a party boat south of Mendocino County. Dungeness crab may not be taken within San Francisco or San Pablo bays, which are important crab nursery areas.

The recreational size limit for Dungeness crab is five and three-quarter inches measured across the shell, directly in front of and excluding the lateral spines. Crab taken from party boats south of Mendocino County must measure at least six inches across.