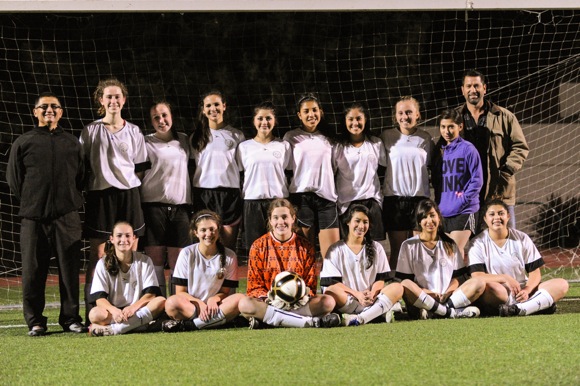 Local soccer fans were thrilled but not surprised when Pastor Guzman’s 2012 girls-under-19 (GU19) team won the championship match held at Kelly Field in Menlo Park on November 11. Having led girls’ teams to championships in 2009 and 2011, Guzman knows a thing or two about producing strong and effective soccer teams.

This year, so many girls signed up for GU19 soccer that two teams were formed, United and Green02. United, coached by Guzman with assistance from Rudy Medina, brought home the championship trophy. Green02, also coached by Guzman with the help of assistants Sandra Horwitz and Adrienne Wong, finished sixth in a competitive league that included teams from as far away as Salinas.

Team United had a challenging start to the season, suffering their first and only loss when they fell to the San Jose Destiny. As the weeks passed, Destiny became known as the team to beat. When United advanced to the championship game, they were considered the underdogs, a fact that motivated them to defeat Destiny by a score of 2-0.