Coleen Duncan has been Artistic Director of the local favorite holiday production, ‘Twas the Night Before Christmas, for the past eight years. But every year, she mixes it up a bit. For instance this year, be on the look out for a stilt walker.

“I was in ‘Twas myself from the age of 10 to through high school,” said Coleen, who started dancing at at the Menlo Park Academy of Dance at age four when the studio was owned by RoseAnn Saylor. “I took all kinds of dance from her — ballet, tap, jazz, rhythmic gymnastics, hula and ballroom. She taught it all.” 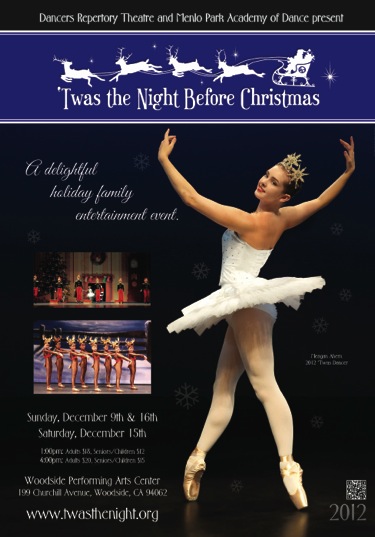 After graduating from Menlo-Atherton High School, Coleen moved south to attend UCLA and then Cal State Northridge. She stayed in the southland, dancing in local theater productions. While Coleen no longer dances — she’s confined to a wheelchair due to illness/injury she suffered 15 years ago — she’s still very much on the dance floor, choreographing all the ‘Twas dances, a true labor of love.

Directing ‘Twas was a bit of an inheritance. “The woman who created the concept and directed the production for years was getting older and realized the task was getting harder,” said Coleen. “She tapped me to take it over.

“It’s a huge time commitment. I don’t think anyone could have a full time job and do this, especially from September to December.”

The show has changed under her tenure. “Today about half the show is different than the when I first took over,” she said. “A lot depends on what kids I have. If I have older dancers, then there are more solos.”

A joint production of the Menlo Park Academy of Dance and Dancers Repertory Theatre, there are 154 cast members this year, 140 of them children. They’re supported by adults who are professional dancers, including the stilt walker. “The kids are so enthusiastic,” Coleen said. “Every year they come back and move up to the next role. It’s wonderful to see them grow with the show. It’s the best part of doing this.”

There are six performances of ‘Twas over two weekends (Dec. 9 and Dec. 15-16), all at the Woodside Performing Arts Center in Woodside. Two of the matinees are sold, out but other performances are available. Tickets can be purchased online.