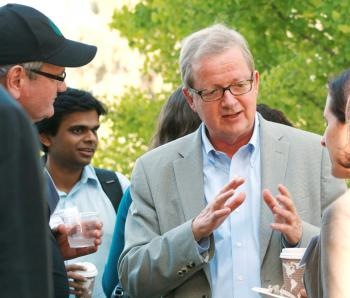 Jens Nørskov (pictured right, center), who has led the SUNCAT Center for Interface Science and Catalysis at SLAC in Menlo Park and Stanford since its creation in 2010, is the latest recipient of an international award honoring scientific contributions to the study of catalysts, which are integral to many important industrial and biological processes.

The Michel Boudart Award for the Advancement of Catalysis is named after a renowned catalysis expert who died last year after a five-decade career at Stanford University. Presented by the European Federation of Catalysis Societies and North American Catalysis Society, it recognizes contributions within the past five years to the understanding and practice of catalysis and comes with a $6,000 prize.

Nørskov said the award acknowledges the achievements of the entire SUNCAT group, which includes strong collaborations in theory, sophisticated computer modeling and experiments.

“It is a recognition of the team and what we’ve accomplished,” he said. “There is a general message here, in the sense that it is by teaming up that you can really move things in a substantial way – that a national lab in conjunction with a research university can really make a difference and attack the broader classes of problems.”

In addition to directing SUNCAT, Nørskov is a professor in Stanford’s Department of Chemical Engineering and a member of the Photon Science faculty at SLAC.