“Quantum Lightswitch” is topic of SLAC public lecture on Jan. 29 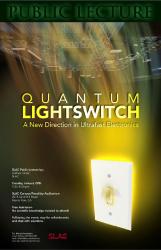 Turner’s talk begins at 7:30 p.m. in SLAC’s Panofsky Auditorium and will highlight research in manipulating atoms’ electrons that could revolutionize computer data storage and retrieval.

While today’s computer hard drives rely on tiny magnets, which are a result of the direction in which electrons spin, Turner will explain the novel concept of “orbital electronics,” and how it could speed up data storage and retrieval thousands of times by controlling how electrons orbit the atomic nucleus.

He will also describe how experiments at LCLS, which can identify ultrafast magnetic properties on the scale of atoms and molecules, may light the way toward such technology breakthroughs.

SLAC Public Lectures are free and last about an hour. Refreshments are served after the lecture, when guests have an opportunity to speak with the presenter.

All are welcome, and you need not be a scientist to attend. Public lectures are intended for a general audience.