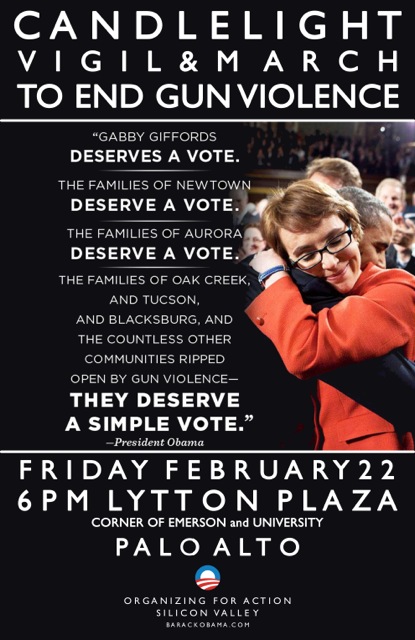 Menlo Park resident Pam Salvatierra emailed InMenlo about a planned candlelight vigil against gun violence planned for Friday, Feb. 22 at 6:00 pm at Lytton Plaza in Palo Alto: “We are trying to get people revved up to say ‘This is enough — we demand background checks on all gun sells.’ This is probably the first in a number of actions on gun violence that I will be organizing to put pressure on congress to take the action that most Americans demand.

“The slogan is ‘Protect Children, Not Guns’ and the event will be part of a national ‘Day of Action to End Gun Violence’. With 92 percent of Americans and 74 percent of NRA members currently supporting expanded background checks, participants at Friday’ event will make the case that such legislation warrants a simple congressional vote. Victims of gun violence across the country deserve it.

Invited speakers include local and state representatives. Candles and signs will be provided. All are welcome.”