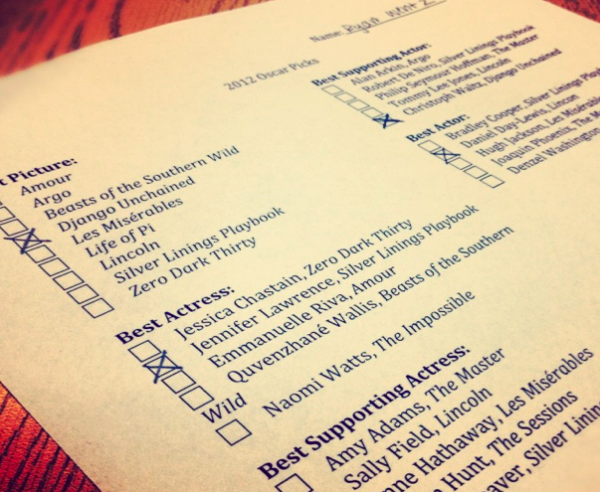 Tonight, the Academy of Motion Picture Arts and Sciences will host the 85th Academy Awards  – officially rebranded this year as The Oscars. Though only a handful of films have been selected to represent the year’s best, 2012 was an extraordinary year in Hollywood. Blockbusters like The Dark Knight Rises and The Hunger Games attracted flocks of movie-viewers throughout the globe, while lower-profile hits like Beasts of the Southern Wild and Silver Linings Playbook set critics abuzz. Here are my picks to win:

Though experts have agreed that this category is essentially a three-horse race between Argo, Lincoln, and Zero Dark Thirty, Django Unchained was truly an example of cinematic excellence. With its unconventionality (its goriness is stomach-turning) stemming from the revolutionary mind of director Quentin Tarantino and unforgettable performances by Jamie Foxx, Leonardo DiCaprio, and most notably Christoph Waltz, Django Unchained contained all of the elements of a Best Picture winner.

Though the film itself was not as thrilling as Oscar opponents Argo and Django Unchained, Lincoln saw an amazing performance from Day-Lewis. He deserves to receive his due from the Academy. Day-Lewis shined, as his metamorphosis into one of the most powerful men in American history powered the movie throughout. Despite strong performances by the entire cast, Day-Lewis truly excelled as Lincoln, as his impersonation was quite possibly one of the most memorable in film history.

In 2012, Lawrence masterfully transformed from a dystopian heroine in The Hunger Games to a mentally unstable widow in Silver Linings Playbook. In the latter, Lawrence convincingly played the damaged counterpart (and dance partner) of the bipolar Bradley Cooper. Lawrence’s heartfelt and emotional performance should undoubtedly earn her an Oscar win, as her brilliance in a difficult role at such a young age will sway voters in her favor.

If you’ve seen Tarantino’s Inglorious Basterds, Waltz’s performance is more of the same. Not because Waltz is predictable in any way, but because he was just as excellent and captivating as he was in his Oscar-winning performance in Tarantino’s 2009 hit. With just as many smirks and a bit more blood, Waltz excelled as a bounty hunter leading Jamie Foxx’s Django to his long-lost wife.

Hathaway’s haunting rendition of I Dreamed a Dream has single-handedly placed her atop this list. The trademark song from the iconic musical was filmed while Hathaway was actually cutting her hair off, adding to the raw emotion of the dramatic scene. Though she had a limited role in the film, the Dallas Morning News called Hathaway “angelic”, while the Washington Post argued that Hathaway’s Fantine was the “centerpiece” of the film.