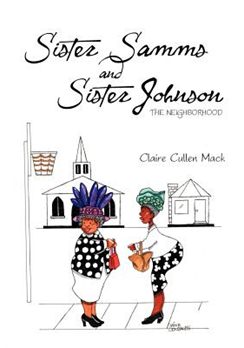 Former San Mateo mayor Claire Mack, a long-time community advocate and broadcasting professional, will discuss her life and new book — Sister Samms and Sister Johnson, The Neighborhood on Saturday — on March 2 from 11:00 am to noon at the Menlo Park Council Chambers, 701 Laurel Street. The book is the story of two women who love and take care of their community.

Ms. Mack’s first book, Imitation of Life: the Next Millennium is loosely based on the novel by Fannie Hurst, Imitation of Life.  Sister Samms and Sister Johnson, The Neighborhood, is based on two characters from her first book. Ms. Mack characterizes these women as “saucy black women who weave tales about their suburban neighborhood and their lives.  Some stories are light, some dark, some a bit ribald — all will touch you.”

Ms. Mack retired in 1998 from KCSM-TV after almost 30 years in television and radio broadcasting.

A native of San Mateo, Ms. Mack has continued her community involvement as a volunteer on many boards and associations, such as The Mills Hospital Board of Trustees and the American Red Cross. She has been the recipient of numerous local, state and national awards, such as the Walk of Honor Citizen of the Year award from the Downtown Association of San Mateo; State of California Woman of the Year (1994); and Outstanding Broadcaster from the American Women in Radio and Television (1974).

Copies of the book will be available for purchase and signing after the talk.  The program is free and open to the public — no reservations are required.

Free wheelchair accessible van service is available for Menlo Park and East Palo Alto seniors and people with disabilities.  Call 330-2512 for van reservations. Note: This is one of a number of events taking place at the Menlo Park Civic Center, so carpooling or public transportation is encouraged.

For event details, call Roberta Roth at 650-330-2512 or e-mail Roberta at rlroth@menlopark.org