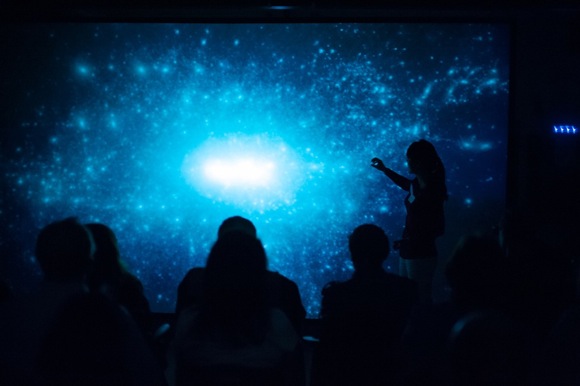 After a decade spent studying some of the most puzzling questions in astrophysics, providing research and learning opportunities to more than 100 graduate students and postdoctoral researchers, publishing thousands of scientific papers and pushing back the boundaries of what’s known about the cosmos, the Kavli Institute for Particle Astrophysics and Cosmology in Menlo Park decided to celebrate by inviting the community to a birthday party.

On March 24, KIPAC opened the doors of the Kavli Building, its home at SLAC, to the public — and more than 350 people took them up on the invitation, making the event a sell out.

Kids of all ages crowded around solar telescopes, made their own pulsars, learned how to classify galaxies, found out the difference between astrophysics and astro-fiction, explored the subtleties of the cosmic microwave background and watched faint, ghost-like traces of cosmic rays appear in a bubble chamber and then fade away. All of these opportunities and more were staffed by a full contingent of KIPAC scientists, from the newest graduate student to KIPAC’s director, Roger Blandford, all of whom wore name tags inscribed with a cheerful “Ask me!”

Blandford called the open house, which was KIPAC’s first, “a bit of an experiment,” but definitely a successful one. Many of the scientists seemed as eager to explain their work as their audiences were to listen.

“I’m excited,” said five-year KIPAC researcher Ralf Kaehler. “So many people have signed up.” Kaehler works with other scientists to create beautiful 3-D movies of cosmic events, some of which were shown at the open house. The movies proved a big draw; six KIPAC scientists were needed to staff the Visualization Lab (pictured above), which was one of the first exhibits to open and one of the last to close.

“It was nice to hear such a buzz at the lunch beforehand,” agreed Becky Canning, a postdoctoral researcher who staffed the Galaxy Zoo exhibit. “Everyone seemed thrilled to be here.”

According to Blandford, KIPAC itself was something of an experiment: “It was a bold adventure writ large by Stanford, and thanks to the efforts of everyone, including SLAC, Stanford, the Kavli Foundation, the Department of Energy, faculty, postdocs and graduate students, we’ve managed to succeed.”

SLAC Director Emeritus Jonathan Dorfan, who led the effort to bring KIPAC to Stanford and SLAC, said, “Whereas 10 years ago Stanford had a small program in particle astrophysics and cosmology, it now boasts one of the best and most vibrant programs worldwide.” 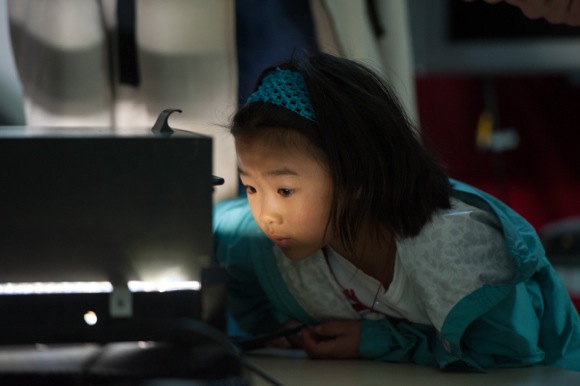 Blandford, who will be stepping down and returning to research June 30 after serving as director twice as long as he originally intended, says he’s doing so at a good time. The list of KIPAC contributions to cosmology and astrophysics is long, and includes leading roles in the Fermi Gamma-ray Space Telescope – whose five-year mission was extended by NASA – and the upcoming Large Synoptic Survey Telescope, with founding KIPAC member Steven Kahn recently named director of the project.

“We’re in a stable position now, with many opportunities ahead. And I genuinely believe that places like KIPAC periodically need fresh ideas and new directions,” Blandford said.

What remain strong at KIPAC are the connections forged among the members and the excitement they all share about their work. “It’s a great community,” said graduate student Michael Shaw. “Everyone here has a story; everyone here has a curiosity about the universe they want to satisfy.”

Variations on that theme rang out again and again. From a simple, “It’s the people,” repeated by several members, to “It’s my home,” spoken by both graduate student Alice Allafort and Tom Abel, the third faculty member to be hired after Blandford and Kahn, every researcher mentioned the sense of community they all shared.

“The vitality. The energy,” said Greg Madejski, who is KIPAC’s assistant director of scientific programs. “Even before KIPAC started, there was a sense that this was something new,” he said. “SLAC was involved in EGRET, the gamma-ray telescope that preceded Fermi. That gave us an idea we could create something better.”Kavl

Ten years later, five years after Fermi launched, KIPAC is still determined to create something better and discover something new.