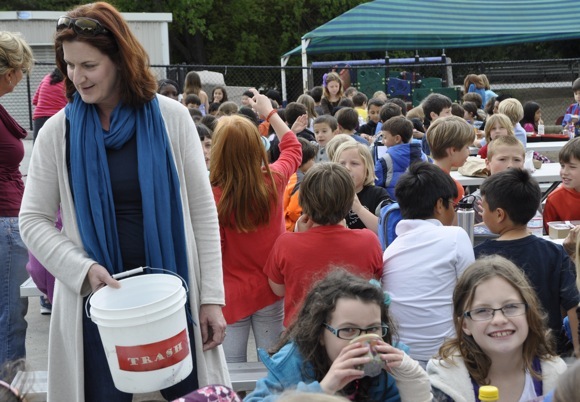 Las Lomitas Elementary School began a significant undertaking four years ago when the PTA formed The Green Team. The action was in response to the Community Cool Campaign introduced to the school by Karen Grove, which was designed to educate students about the importance of taking care of their environment.

Initially, Green Team volunteers staged a successful reusable water-bottle fundraiser and sponsored a number of bike/transportation intiatives, in addition to providing monthly tips for the school newsletter. In the spring of 2009, with the support of then Vice Principal [now Principal] Sue Sartor, The Green Team and an extended group of volunteers implemented a campus-wide composting program for lunch waste, which continues to be the Team’s focus today. 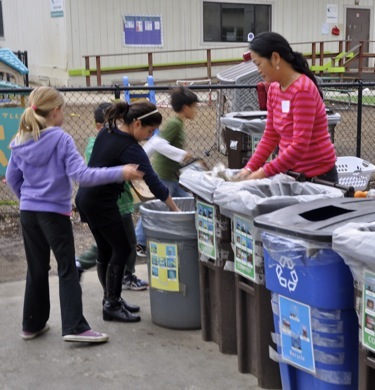 With the help of parent volunteers, students divert over 90% of their lunch trash to compost. That is the equivalent of over 600 large compost bins on an annual basis. Students and their families learn about using recyclable and compostable materials in homemade lunches, an educational effort that also includes the school’s hot lunch provider.

It all may sound simple enough, but the road to achieving the substantial diversion of trash to compost has been littered with challenge. The biggest obstacle came in 2011 when the area refuse service changed hands. Originally the Las Lomitas School District was told that the service could not accommodate picking up lunch compost in clear plastic garbage bags but rather required the use of costly BPI compostable bags. With the support of Choice Lunch, the district hot food provider, the district was able to work with Recology to implement a new pickup plan with clear plastic garbage bags so compostable material was easily identifiable.

With first to third grade participants, composting and recycling efforts still require at least two parent volunteers to oversee the disposal of lunch each day.  Many of the current parent volunteers do so both for the environmental aspect as well as being able to see their children during the school day. Comments Giannamaria Wren: “Unlike the classroom, it’s where the real action happens. I love watching the kid-to-kid interaction.”

During Earth Week, April 17 – 24, The Green Team will be sending home trash generated from home packed lunches. In addition to lessening the amount of trash pickup at the school, Team members hope to generate a greater awareness of the quantity of trash generated by each lunch and to further encourage the use of reusable and recyclable materials.