Kevin and Bernadette Callahan were where they’ve been at 7:00 am for the past eight years, staffing the energizer station on San Mateo Drive in Menlo Park near the bike bridge over San Francisquito Creek. “The bags are bigger this year,” Bernadette told three cyclists, including Kent (green and orange shirt) and Sarah (right near bridge), both Menlo Park residents and colleagues at Gunn High School in Palo Alto where they teach.

The Callahan’s location is a route that’s popular for cyclists even when it’s not Bike To Work Day. “We get a lot of doctors and medical staff who cycle to work every day because there’s such limited parking at Stanford,” said Kevin.

Gudrun Enger (center in top photo) was at a new station sponsored by Menlo Swim and Sport at the corner of Valparaiso and the Alameda along with two west Menlo residents Ruth Steinberg (right) and Becky Flanagan (left). 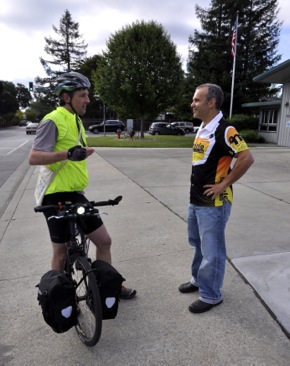 “As a sometimes bike commuter, I thought this would be a great thing for Menlo Swim and Sport to do, and contacted the BTWD folks in January,” said Gudrun. “They hooked me up with Debbie Helming at the City of Menlo Park, who coordinates all the stations in Menlo Park, and since they had enough stations in downtown Menlo Park, she suggested west Menlo Park.”

“So far, we’ve been getting more drive bys than stoppers, which is a shame because we have two crates of just-picked apricots donated from Frog Hollow Farms.”

Joining the three women was Hani Juha (right, photo right), a Team Sheeper Triathlon coach and founder of the Menlo Bike Club. His official job was to be on hand to help commuters with flat tires and bike adjustments. But he was also taking the opportunity to catch up with commuting cyclists like Brian Stephens (left in photo).