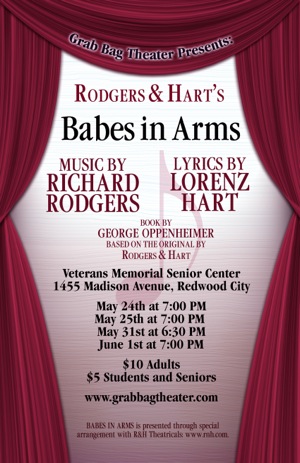 The spring production of the Grab Bag Theater is Babes In Arms, which will be presented over two weekends at the Veterans Memorial Senior Center in Redwood City. The Leadership Board of the student-run theater group is made up of teens who attend Menlo-Atherton High School.

Based on the original by Rodgers & Hart, the show takes the audience into the Surf & Sand Playhouse as a group of young apprentices dedicated to mounting an original show try to stay one step ahead of the surly theater owner. An ex-child star, her overbearing mother, and a hack southern playwright provide further complications, but of course, the show must go on. Music is by Richard Rodgers; lyrics are by Lorenz Hart; book by George Oppenheimer.

“The key reason that we chose to produce Babes in Arms is the message the show sends,” said  Maddie Rostami, the production’s co-director, who is also the Artistic Director for Grab Bag Theater: “It’s all about that classic ‘kids putting on a show’ spirit, which also lies at the heart of what we do at Grab Bag.

“We hoped that our cast would be able to relate and get excited about the show as we, like all the characters, fight against odds to put on a show that we believe in. The music was also a deciding factor. With songs like My Funny Valentine and The Lady is a Tramp we knew we couldn’t go wrong.”