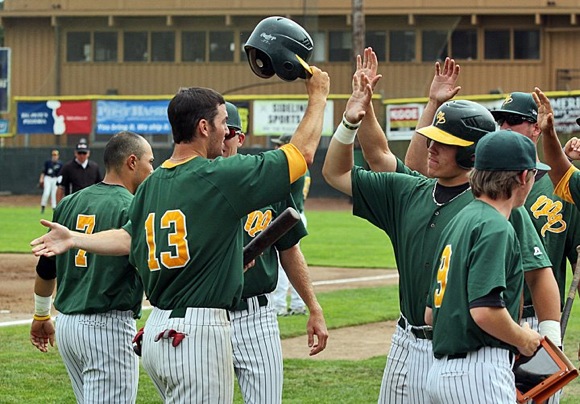 The Menlo Park Legends will open their 2013 Summer Wood Bat season on May 31st in Redding with the same Green and Gold uniforms but a decidedly different look to the roster. Many of manager David Klein’s dependable favorites have moved on to other opportunities. Klein said, “I have no idea of the identity of this team. We should be competitive on the mound as we have lots of fresh arms. We should be well rounded in the field with a number of utility players who can fill different roles.”

Fortunately, Tyger Pederson (University of Pacific) and CJ Jacobe (Santa Clara) are returning to anchor the offense for the Legends. Kyle Zirbes battled against the Legends last season for the Nor Cal Longhorns and Antonio Freschet returns from Northwestern for his first Legends season. They should be solid performers in the middle infield. Catcher Luke Pappas (Stanford), Geo Saba (1B Stanford) and Zach Hoffpauir (OF Stanford) will join the team after the end of their collegiate seasons. Wesley Hopkins (Pierce College) shows the promise of some booming power.

Pitchers Eric Davila (Menlo College), DJ Zapata (Santa Clara), and DJ Sharabi (CSM) return on a Legends staff that will hope to replace anchors Ray Torres and Alon Liechman ( 11 of 32 wins) from their 2012 staff. Davila had a solid 3.74 era in 2012 over 53 innings and Sharabi was even better with a 2.72 era over 39 innings. Jacobe may be asked to do some mound work also. Mike Dodakian, Chris England and Adam Frank hope to carry the success of the Dartmouth “Green” from the East Coast to the West Coast. Someone will need to take the place of Joe Goldenberg as the closer.

Klein is also very excited about his incredible coaching staff. Skylar Brewer, Leo Ortiz and Andrew Klein are returning for their fifth seasons. Pitching Coach Bill Ryan will have his hand full with 15 pitchers to work with. Dustin Woodard (head assistant at Menlo College) will be the team’s first full time hitting coach.

Manager Klein has booked another challenging season. An opening series with a four game set in Redding against the Colt 45’s, the first local visit of the Atwater Aviators at Canada June 12 and 14, and a visit to historic Arcata Ball Park to battle the Humboldt Crabs highlight the 2013 schedule. July 21st will be the first ever Legends games at beautiful Evans Diamond in Berkeley against the California Warriors. Teams in the Far West League have recruited Division 1 players from colleges all across the United States.

The Legends will make a run at the Rawlings Cup Tournament. After falling a few runs shy of beating the Santa Barbara Foresters and heading to Wichita for the NBC World Series in 2010, the Legends will have their focus on meeting the Foresters in the championship game once again.

The Legends are looking forward to an exciting summer of baseball. Home games are played at Cañada College. Schedules and updated results can be found at online menloparklegends.com. Be Legendary!