Informal playspaces for our kids, right under our noses in Menlo Park 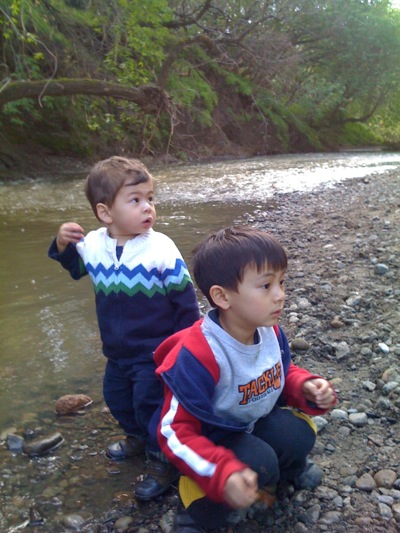 Recently, I took my boys to a creek in my sister’s residential neighborhood in suburban Pittsburgh, and they had an absolutely fabulous time for hours.

And no one else was there. I sense a pattern.

I wrote this article a few years ago about the creek down the street from my house. It’s one of my kids’ favorite playspaces in the world, and yet, despite the fact that thousands of kids live within a few blocks of it, very few kids go there on an average day.

Chances are, most of you reading this live within a half mile of some ignored, informal playspace – a creek, some woods, an abandoned lot, or an alley with a clean wall to bounce a ball on. It doesn’t have to be much in your eyes, because, of course, that’s not the point. Kids love places like these that invite free play. They could care less that they’re not endorsed by adults as official parks or playgrounds.

We’re ignoring these informal playspaces, and our children are missing out as a result. They’re missing out for two reasons: they end up having less opportunities to play, and they also lose an opportunity as they grow up to gain competence navigating their neighborhoods on their own.

So, why are we ignoring these great informal playspaces? Well, one obvious reason is that our kids don’t have time to wander their neighborhoods, with parents or not, as they spend practically all their free time indoors in front of screens and outdoors at activities supervised by adults.

Another reason, though, is that we’ve sent the message to kids, in dozens of ways, that informal playspaces are not legitimate. Parks and playgrounds are the formal, approved playspaces, where kids are supposed to play.

Creeks and woods and vacant lots and alleys are dangerous. They often have poison oak or trees with weak limbs or boards with nails sticking out or broken glass. If kids play at these places, many adults aren’t happy because it increases possible legal liability, and because it takes kids away from parks, which are struggling these days to attract attendees and funding.

Kaboom!, an organization that I love because of its forceful advocacy of unsupervised play, maintains a “Map of Play” database on its web site that is basically a map of playgrounds. Kaboom defines a playspace as “a park, playground or sports field,” so it’s no wonder that playspaces such as the creek by our house and the woods on the other side of it aren’t listed in the Map of Play database.

Kids need to be encouraged to frequent all the playspaces, informal and formal, close to where they live. According to the Centers for Disease Control, 80% of Americans don’t live within a half mile of a park. They and Kaboom! define areas like these without a nearby park as “play deserts.”

Obviously, this narrow definition of playspace ignores a lot of great places. In fact, if we include all sidewalks, courtyards, and front and back yards as “playspaces,” it’s obvious that all kids have playspaces right outside their front doors. We just need to help our kids recognize this. I’ve certainly made my front yard and back yard into very vibrant playspaces for my kids and neighbor kids.

Why are parks and playgrounds so special? Yes, my kids like them, but they like our creek and front and back yards more. A heck of a lot more.