John Hill watched with eager anticipation as controllers in Menlo Park ramped up the power systems driving SLAC’s X-ray laser in an attempt to achieve the record high energies needed to make his experiment a runaway success.

The Brookhaven National Laboratory scientist was the leader of a research team that had come from Illinois, Germany, Switzerland and England to use the Linac Coherent Light Source (LCLS), and this was their last day. They would get only one shot.

Gathered in SLAC’s Main Control Center with LCLS staff members, the team watched as blips of green appeared in a long sequence across a screen. Each represented a klystron working at full power to accelerate a beam of electrons, which would be converted to LCLS X-ray pulses. To reach the high X-ray energies they were aiming for, all of the 80 klystrons associated with LCLS would need to operate at near-peak levels.

In a few instances, the lights turned red. “The users asked, ‘Is it over?'” recalled LCLS staff scientist Marcin Sikorski. “No. They brought the klystrons back quickly, in a matter of minutes.”

With all systems go, the energy of the X-ray pulses soared to 11.2 kilo-electronvolts (keV) – a new record, about 35 percent higher than LCLS had originally been designed to reach – and stayed there for 24 hours nearly uninterrupted. It’s a performance the LCLS staff hopes to duplicate and even exceed, to the benefit of a wide range of future experiments. 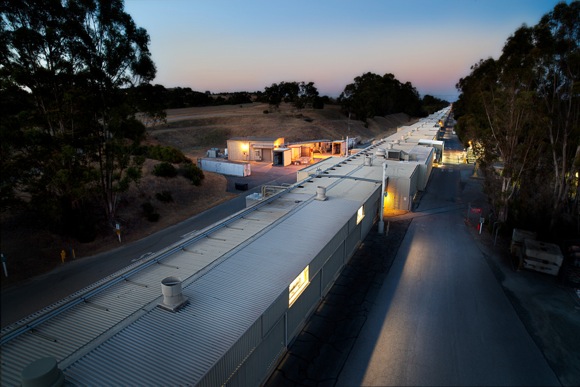 The record-high energy level was key for Hill’s experiment, said David Fritz, acting director for the LCLS Science, Research and Development Division, as it tapped a powerful resonance – like the loud plucking of a violin string – in iridium, a chemical component of the sample under study.

When strongly enhanced by high-energy X-rays, as it was that day, this resonance “gives you sensitivity to particular electronic states in atoms,” Fritz said, which in this sample “happens to be very important for magnetic properties.” Without this high energy, the experiment had detected only a faint signal and generated a limited amount of data.

After hitting the energy record, the detector was suddenly measuring an “enormous amount of X-rays” about 150 times more intense than before, Hill said, producing a very clear and distinct signal.

“What had been a few dots on the detector became a bright cluster of intensity,” Hill said. “We got 24 hours of data in this wonderful condition.” After the successful test, Hill is already talking about plans for follow-up experiments at LCLS, including experiments that add other laser pulses to study how processes evolve over time.

This story originally appeared in SLAC Today and is used with permission. The complete article can be read here.

Caption for middle photo, courtesy of SLAC Multimedia Communications: While SLAC’s linear accelerator is in an underground tunnel, the power systems that help drive it are housed in this above-ground structure.