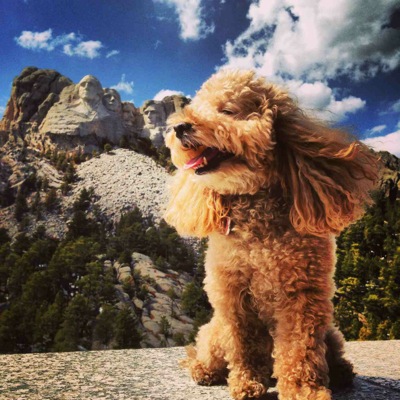 Annabelle, a nine-year-old apricot toy poodle, is, to put it mildly, a ham. Bring out a camera, and like a model, she strikes a pose.

“I’ve had her since she was the size of a coke can,” says owner Holly Nugent. “She was born in New York, and we recently spent four months there. But, she’s happiest at home in Menlo Park.”

Holly got the idea of photographing Annabelle against majestic backdrops when the two of them drove East shortly after the first of the year. “I sat her at the edge of the Grand Canyon and she beamed.”

On the return trip, the two of them were joined by another Menlo Park resident, Jack Reis, who assumed the role of Annabelle’s portraitist. “I enjoyed the photos Holly posted on Facebook on her voyage East, so I took up the duties on the way back West,” said Jack.  “I’ve been a hobbyist photographer all my life. It ties in with my professional background in visual design. 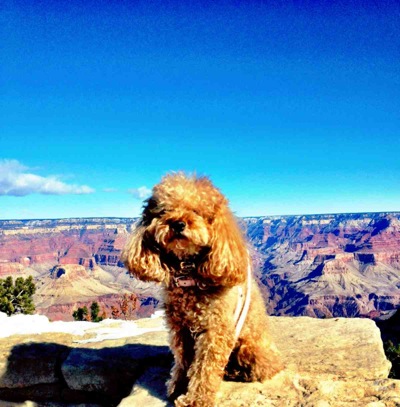 “Our objective with the Annabelle- across-America portrait series was to capture the contrast in scale in a playful way without losing the majesty of scenary — or the poodle.”

Added Jack with a smile: “In fact we think Annabelle enhances the settings. She has the face that says ‘what’s the big deal. I’m here.'”

It appears that Annabelle has a growing fan base. She’s started to get some Instagram followers at #majesticpoodle.

“She poised for all those picture with a sit and stay command,” said proud owner Holly. “As a model, she knows how to work the camera. She’d turn her face to the wind so the breeze would lift her coat ever so slightly. Then, she’d turn to the sun and squint when she found the light.

“She has a fierce beauty but also a fuzziness. She’s such a lady at the same time.”