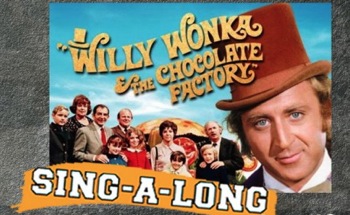 The City of Menlo Park Community Services Department is teaming up with Guggenheim Entertainment to bring you an interactive fun-filled afternoon at the Menlo-Atherton Performing Arts Center. Follow Charlie as he explores the magical wonders of Willy Wonka’s chocolate factory. Come in costume with the family ready to sing-along, act-along, and laugh-along to the 1971 Gene Wilder musical film.

Sing-along events are presented with a pre-show introduction including explanation of the sing-along elements. Guests are encouraged to dress up as their favorite Willy Wonka character and play along with the movie. Tickets can be purchased in advance online for $8:00.