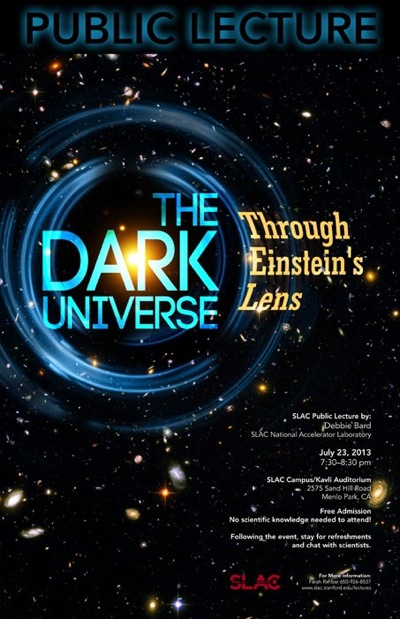 Debbie Bard, a staff scientist at SLAC in Menlo Park and a member of the Kavli Institute for Particle Astrophyics and Cosmology, will deliver the SLAC Public Lecture, “The Dark Universe Through Einstein’s Lens,”on July 23 from 7:30 to 8;30 pm.

One of the most surprising predictions made by Einstein’s theory of relativity is that light doesn’t travel through the universe in a straight line. The gravitational field of massive objects will deflect the path of light traveling past, giving some very dramatic effects. We see multiple images of quasars, galaxies smeared into arcs and circles and magnified images of the most distant objects in the universe. This talk will explain how gravitational lensing was first observed and discuss how scientists use this phenomenon to study everything from exoplanets to dark matter to the structure of the universe and the mysterious dark energy.

Bard began her career at SLAC as a particle physicist and has since graduated to studying galaxy clusters – moving from exploring the most miniscule bits of matter in the universe to the largest structures known. Currently she’s developing new ways to mine data from the future Large Synoptic Survey Telescope (LSST) for information. Discovering how to push gravitational lensing to its limits is one promising focus of her research.

SLAC Public Lectures are free and last about an hour. Refreshments are served after the lecture, when guests have an opportunity to speak with the presenter. All are welcome, and you need not be a scientist to attend. Public lectures are intended for a general audience. SLAC is located at 2575 Sand Hill Road in Menlo Park.