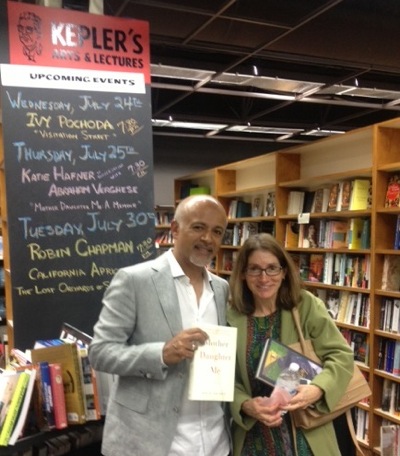 The memoir chronicles Hafner’s multigenerational living experiment with her elderly mother and teenage daughter that went awry — after years of pent-up emotion regarding Hafner’s mother’s severe alcoholism. At ages 10 and 12, Hafner and her sister were permanently removed from their mother’s house and sent to live with their father and step-mother.

Her mother did not raise her, but they stayed in touch. So, in the summer of 2009 —  in the wake of another crisis in her mother’s life — Hafner offered to have her mother move-in, with her and her daughter.

During the Kepler’s conversation, Verghese questioned Hafner’s ability to look past her mother’s vast parenting imperfections, so much so, that she would be willing to rebuild a relationship built on such an unstable foundation. Much like Hafner’s memoir, her answer was both candidly self-analytical and remarkably frank: “I believe that our parents do the best they can, given what they have to work with.” 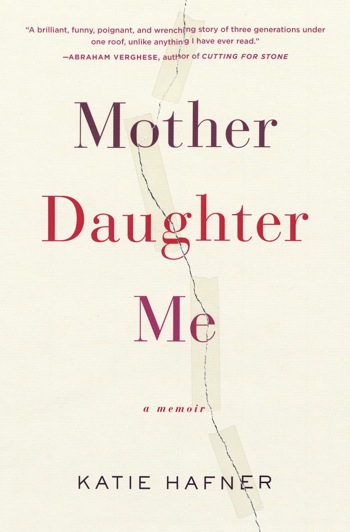 Her answer segued the authors’ conversation into one of the central questions of Mother Daughter Me: What is our obligation to our parents as they age, particularly if they were far from perfect parents when we were children? The question is especially relevant in today’s world, as the number of multigenerational homes is increasing exponentially.

It was at this objective observation that Verghese pointedly noted Hafner’s career as a journalist and asked how that affected her telling of Mother Daughter Me. She responded that it took “several terrible drafts” and a “therapist as an editor” to achieve the kind of insight necessary for such an intimate and telling memoir.

Months ago, upon reading the initial galley copy, Verghese provided a ringing endorsement of Mother Daughter Me with the following quote, found on the book’s cover:

“This brilliant, funny, poignant, and wrenching story of three generations under one roof is quite unlike anything I have ever read. I love Hafner’s prose, her humor, the images she conjures, her choices of what to tell and when, the weaving together of family threads to produce this luminous and lasting tapestry. The story lingered with me long after I read the last page.”

As the conversation came to a close and Hafner prepared her final excerpt reading, Verghese again praised Hafner’s telling and mentioned that “I don’t put my name lightly on a book.”