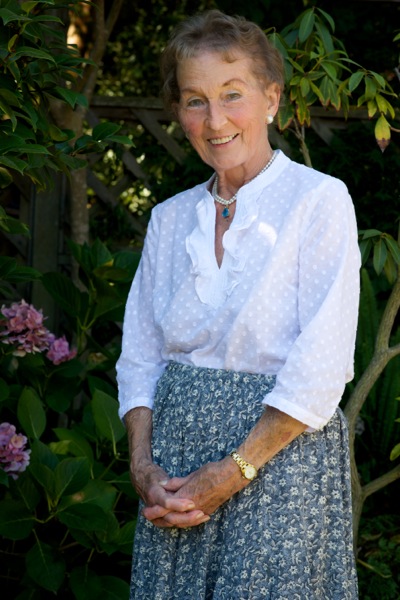 Since landing in Menlo Park in 1958, Sophie Stallman has raised a family and been instrumental in bringing gymnastics to the Bay Area. Along the way, she studied landscape design which she put to good use in the backyard of her hillside home in Ladera. Now she’s added “author” to her list of accomplishments.

Her book My War, My Life tells the tale of her life as a teenager in occupied Warsaw during World War II. “I started writing about 10 years ago,” she said. “I wrote to unload the memories. In many respects, it was when I started grieving.

“It’s not a gruesome book as some might think. There are a lot of light moments.”

Sophie says she survived by not being afraid and trusting her instincts. “I was 13, so I was very aware of what was going on,” she said. “I attended a clandestine high school. I studied modern dance, which laid the foundation for my gymnastics coaching when I came to Menlo Park.”

One of Sophie’s proudest moments is when she took 12 of her young gymnasts to Eastern Europe in 1977. “The girls were my safety net because I was a politically dirty woman to the Communists.

“I emailed my gymnasts about the book. One wrote back that it was so important to be on that team ‘even though I was a lousy gymnast.'”

Now Sophie has the chronicle of her teenage years to add to the stories of the many young gymnasts she coached.