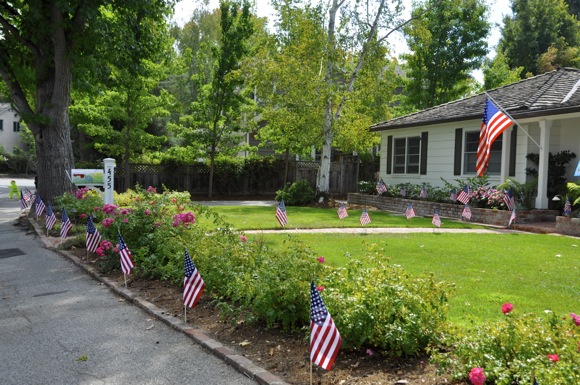 The front yard of Sally and Bill Russ’s home in Menlo Park is lined with the American flag today to commemorate Patriot Day. It was 12 years ago on September 11th that terrorists attacked targets in New York City and the Washington, D.C. metropolitan area, killing almost 3,000 people. In remarksPresident Obama said:”Today, we can honor those we lost by building a nation worthy of their memories.” Speaking at the Pentagon President Obama said: “Let us have the confidence in the values that make us American, which we must never lose, the shining liberties that make us a beacon of the world; the rich diversity that makes us stronger, the unity and commitment to one another that we sustain on this National Day of Service and Remembrance.”