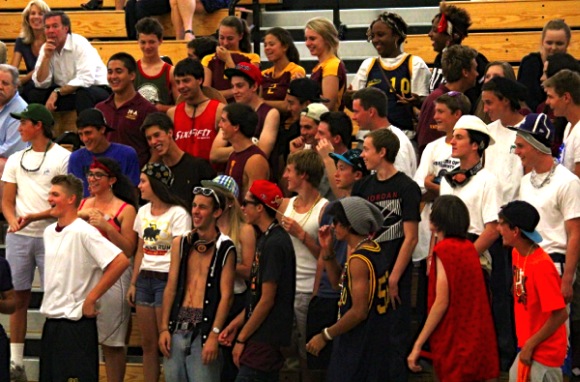 After lacking true leadership and consistent participation for the past two years, the Seventh Woman Club is making a comeback at Menlo-Atherton High School for the 2013 girls Volleyball season, led by senior co-presidents Josh Weiner and Aditya Sinha.

The idea for the club started with Josh’s older brother, Evan Weiner, and several of his friends during their sophomore year in 2008.  “We were kicking around ideas of making shirts, dressing up in spandex, but nothing really ever came of it,” Evan said.

The following year, however, seniors Dominic Mullen, Kyle Kessler, and Sam McClure decided to take action on the idea and created the Seventh Woman Club, becoming the “founding fathers” as Evan stated.  Luckily for the seniors, Conrad Yu, Nathaniel Skinner, and Evan Weiner himself took charge the following year, excited to “keep the Seventh Woman as loud and intrusive as ever,” as Evan described it.

However, the club “lost traction over the years”, according to Aditya with little support during the 2011 and 2012 volleyball seasons. Finally, after two unsuccessful years, the club has come back to life, thanks to the leadership of the co-presidents.

Josh said that he and Aditya  ”decided to revamp the club,” and that they “got a couple of really spirited juniors and a couple sophomores, so ideally the club will have some sort of posterity.” So far, the presidents have recruited junior Adam Scandlyn as Vice President, junior Whittaker Jellins as Junior Ambassador, and sophomore Christian Fioretti as Underclassman Chair, with hopes of finding another sophomore and a freshman, so that there will be representatives from each grade.

The overall goal of the Seventh Woman Club is to cheer on the volleyball team and bring enthusiasm to the serious game environment. “You can tell the team appreciates the support, and they love the fact that we are there and cheering for them at pretty much every game,” said Josh.

The club plans to show their support both on and off the court by wearing their Seventh Woman shirts every game day, and reminding everyone around school of the approaching game. Josh Weiner said that the club “ordered 100 shirts this year, and within the first day of opening sales, we had sold 86.” Thirty shirts were quickly added to the order, and by the end of the week, all 130 shirts had been sold.

The club plans to attend as many games as possible this season, including away games.