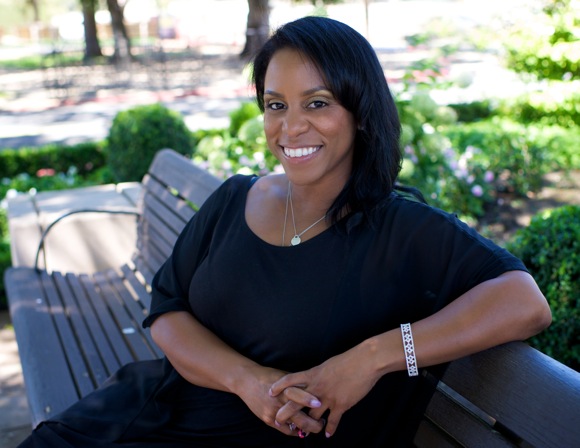 “‘I can’t believe this is happening to me, that’s what I thought at the time,'” recalled Ja’Vonne Alexander about the period of time she found herself, along with her four children, homeless. “I remember saying to myself, ‘If you ever thought your were strong, now is the time to be stronger.'”

A military Veteran, Ja’Vonne (pictured above) was savvy enough to seek out the Veterans Department in Menlo Park, who put her in touch with InnVision/Shelter Network (IVSN), which arranged for her and and her family to stay at Redwood Family House, where they remained for three months.

“I got promoted while I going through homelessness,” said Ja’Vonne, who works at Stanford Hospital and now lives in the South Bay. “My teenage son struggled the most, but my teenage daughter and two younger children sailed through. The younger ones loved all of the activities.

“What I knew is that it would be shameful to quit. As a parent, you can’t have too much pride. As I look back, there were so many compassionate people there to help me.”

Recently, Menlo Park-based Innvision Shelter Network, which serves homeless families and individuals throughout Silicon Valley and the San Francisco Peninsula, was awarded a grant of $35,000 from Swords to Plowshares to fund programming for female homeless Veterans.

The Department of Veterans Affairs estimates nearly 10% of the 200,000 female Veterans in California have been or currently are homeless. Women Veterans face a wide range of challenges related to military trauma, including post-traumatic stress disorder, depression, and substance abuse. These issues, coupled with the competitive job market and high cost of housing, force many women Veterans into homelessness.

“A key component of the female Veteran program is mentoring,” said Brian Greenberg, IVSN’s Vice President of Programs and Services. “One of the really powerful findings in the last 50 years is what a strong impact a mentor can have, no matter your age. We all benefit from role models and informal life coaches.”

For her part, Ja’Vonne is participating in IVSN’s alumni program, speaking this month to current residents at Haven House in Menlo Park. “You have to allow space in your life for people to help you,” she said. “It can be done, it is possible. You can reestablish and redeem yourself — if you don’t quit.”

In addition to grants, IVSN is supported by financial contributions and in-kind donations. More information is available on the nonprofit’s website.