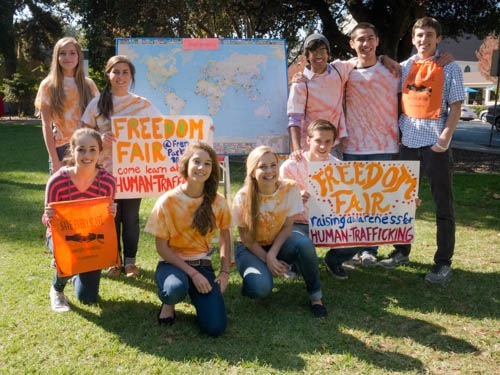 This past Sunday, students from Menlo-Atherton and Sacred Heart high schools hosted a successful anti-trafficking information fair at Fremont Park in downtown Menlo Park. The goal of the fair was to raise awareness of modern day slavery — issues such as domestic servitude, sex trafficking, and inhumane working conditions. Many of the students were members of M-A’s “Save Every Slave” club, which sponsored the event.

Representatives from a variety of Bay Area organizations handed out informational fliers and sold t-shirts, fair trade chocolate, and jewelry. The list included the Bay Area Anti-Trafficking Coalition,which works to mobilize the  community to fight for a slave-free Bay Area. Also attending were Love Never Fails, an organization dedicated to the protection of youth involved in domestic sex trafficking, Freedom House, a provider of safe homes for survivors of human trafficking, and New Day for Children, which is also dedicated to rescuing and providing for the needs of American girls caught up in human trafficking.

“Slavery sounds like a concept from years past or miles away” said Caleb O’Neel, a Senior at M-A, who along with Ruth McGee [author of this post] is co-president of the  “Save Every Slave” club. “But, in reality, there are nearly 30 million people living in enslaved conditions in the world today, including here in the Bay Area.”

As examples of local slavery, O’Neel pointed to cases such a mistreatment of household help and prostitutes. The Bay Area Anti-Trafficking Coalition also highlighted that even people going house-to-house selling magazines or seeking donations might be in a bondage situation from which they can’t escape.

“There is a lot that we can do to fight modern day slavery” said Jessica Bird, a Senior at Sacred Heart Prep. For example, Love Never Fails presented decorative wrist bands at their display table, which they hand out to young prostitutes. Secretly imprinted on the inside of these bands are phone numbers for help lines.

The information fair at Fremont Park also provided many ideas for how consumers can vote against modern day slavery with their dollars, by making sure that those goods most often implicated with inhuman and bondage working conditions are fair-trade certified. Chocolate, tea, rice, sugar, and clothing items are on the list of suspect products. Students at the fair pointed their visitors to mobile apps such as The Better World Shopper  that can serve as a handy reference for responsible — and irresponsible — brands for people who are shopping.