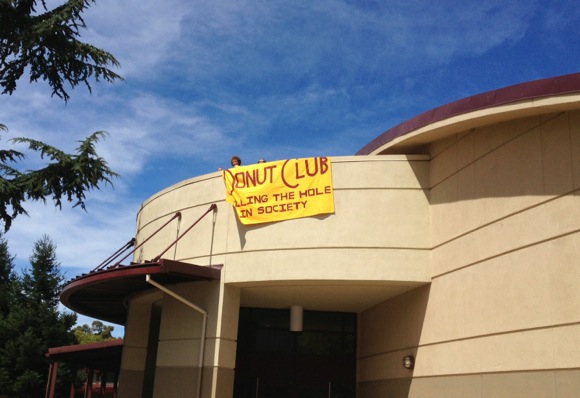 The Donut Club is a mysteriously wonderful Menlo-Atherton High School club that provides the student body with tasty treats in exchange for cans. Although this club was doing better than ever last year, there have been some questions as to what will happen this year due to the fact that all the founding members have graduated.

I had a chance to sit down with senior Sabrina Kinney, the new president of the Donut Club, and talk to her about the upcoming year for the club, the changes that will be made, and the process new members went through to join the elite club.

“We are trying to keep everything the same, like keeping the announcements,” she said. “Everyone loves the MA Donut Club so we are going to try to stay witty. We are definitely staying with Chuck’s for donuts, there is no better place. Maybe we’ll switch it up and have some Sprinkles offered every once a month to keep some interest.”

How would you respond do people calling the MA Donut Club a “cult”?

“Yeah, I’ve had people tell me it’s an exclusive club, a cult, and whatnot. I hope to keep that mentality up, no denying it, because that’s part of the magic of the club I think. People look up to it. ‘Whoa these Donut Club people, they’re pretty cool.’ And the best thing about the club is everyone can be a part of it, there are just five or six people pulling the strings but no one really sees what they do… I used to just think the people just had to buy donuts. It’s so much harder than it looks. However, I think everyone knows the Donut Clubs intentions are good.”

Are there any plans for more banners or marks to be left on the school?

“Yes! We are looking to make more banners. None of us are skilled enough to make another table, but definitely a banner. The precision needed to make these banners is insane… we took all the things that could be used to make a banner plus tools you need for math and used them to make the perfect circles or measure out the words. But we will definitely leave more marks.”

How does admin feel about the banners, why don’t they take them down?

“Partially I think it is because admin doesn’t know how to take them down: we made intricate knots and used tape. Three weekends ago we went on the roof of the library, and tried to take [the banner] down. But it wouldn’t work. Also, I think the admin likes us. I mean if you don’t like the Donut Club, what don’t you like?”

Despite any minor changes being made to the club, like moving from C-4 to C-15, the Donut Club is trying to stay true to its motto of “Filling the hole in society, one donut at a time.”

As Sabrina said, “It’s one of those clubs that makes you glad to be on campus.”