“Congratulations are in order for the Leadership Class and greater student community for their awesome success with the Canned Food Drive 2013. Under the leadership of Mike Amoroso, Jonathan Senigaglia and Andy Stuart, M-A students far surpassed their goal of collecting 100,000 cans. Instead, in the course of five weeks of canning at local stores, they were able to add a record 159,861 cans to the coffers of Second Harvest Food Bank. 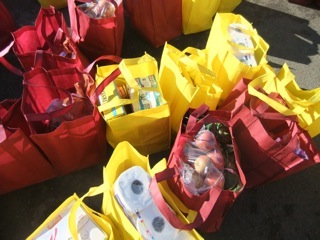 “Last weekend, students, parent volunteers and community members joined hands to assemble bundles of over 80 pounds of food per family, packaged in 2,600 sturdy maroon and gold reusable bags. Special thanks go to the parent volunteers who pitched in on a frigid Saturday morning and those who brought in dozens upon dozens of treats to sustain the students on Distribution Day, and to the stores that allowed our students to can at their doors. Thank you for being a part of a fabulous community tradition!”