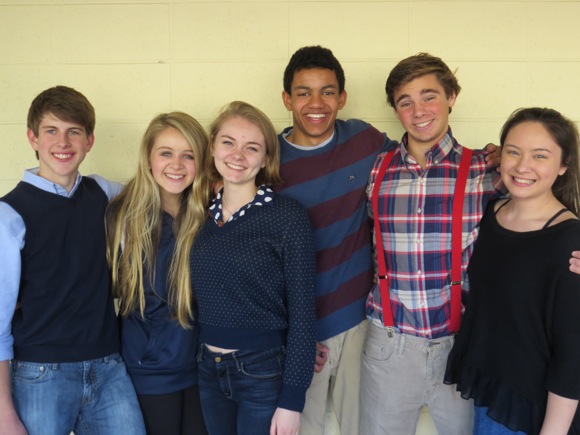 The Menlo School Drama Department is presenting Thornton Wilder’s 1938 Pulitzer Prize-winning play, Our Town, in the Florence Moore Auditorium on the Menlo School campus, 50 Valparaiso Avenue, Atherton, from Feb. 6th to 9th. The performances are at 7:30 pm on Feb. 6-8 and at 2:00 pm on Feb. 9.

“Our Town is not a play about the evaporated glory of simpler yesteryears. On the contrary, it whispers to us the urgent necessity of living in the here and now — which is all anyone, anywhere, be it Grover’s Corners or the Bay Area, really ever has,” says Menlo’s new drama director, Steven Minning.

Junior Miles Fowler, who plays the role of George Gibbs, is thrilled to be a part of the show: “I’m looking forward to this production because the play is revered worldwide as an American classic. I’m honored to be one of many thousands of talented actors and actresses, including this cast, who can say they took part in a production of Our Town.”

As part of the experience, the Menlo School Drama Department plans to support the message of the play by raising funds to give back to the local community, including InnVision Shelter Network of Menlo Park, with which Menlo has had a long-term relationship. InnVision Shelter Network helps homeless families and individuals in our community return to permanent housing and self-sufficiency.

Tickets are $8 for adults and $5 for students. They are available online  or by emailing tickets@menloschool.org.