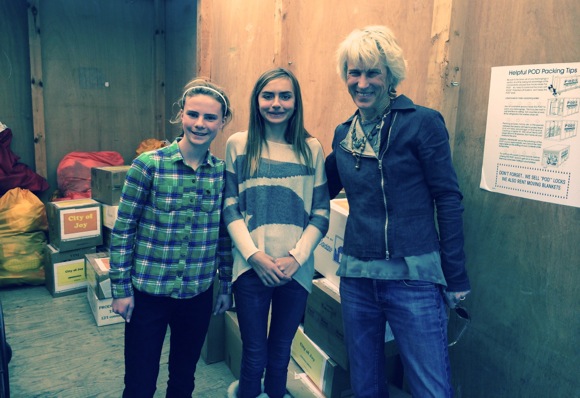 On Februrary 27, a very special delivery took flight, headed to Africa on the Google Plane. Thanks to the efforts of a few local students and hundreds of donations from all over the United States, over 2600 items were en route to a community known as The City of Joy, a refuge for battered women in the Congo.

As part of a Girl Scout project known as The Silver Award, Claire Bozdog and Evelyn Calhoon were tasked with architecting a self-sustaining service program. With some help from Mary Ruth Quinn, a friend who had traveled to the Congo in 2013, they were put in touch with the creator of the City of Joy and author of The Vagina Monologues, Eve Ensler.

After a trip to the Congo in 2007, Eve was touched by the number of women she met who were survivors of violence and was determined to create a place for them to heal and rebuild.  With help from UNICEF, the construction of The City of Joy was started in 2009, and it was able to accept its first residents in 2011.  Fully owned and operated by locals, this sanctuary teaches its members to become survivors, not victims.

After communicating with Eve and her team, Claire and Evelyn were given a wish list of basic supplies such as toothbrushes, toothpaste, and baby powder requested by The City of Joy resident.  Armed with this list, Claire and Evelyn went to local Bay Area dentists and orthodontists asking for donations and held a three-day drive at Hillview Middle School where, with the help of the Hillview Service Club, they collected clothing and hygienic items.  On February 24, they hauled the 125 pounds of supplies to Palo Alto, where they helped package and box up everything to be loaded onto the Google Plane.

Though their project has come to a close, they have taken steps to ensure that this drive continues to take place thanks in large part to the efforts of the Hillview Service Club which will post updates about future donations drives.

Claire, Evelyn, and the Hillview Service Club would like to thank every one who donated items, with special thanks to some local dentists and orthodontists that each gave hundreds of supplies: Dr. Vernon J. Adams, Dr. Scott Kaloust, Dr. Kathleen Tavarez and Dr. Paul Gerber.