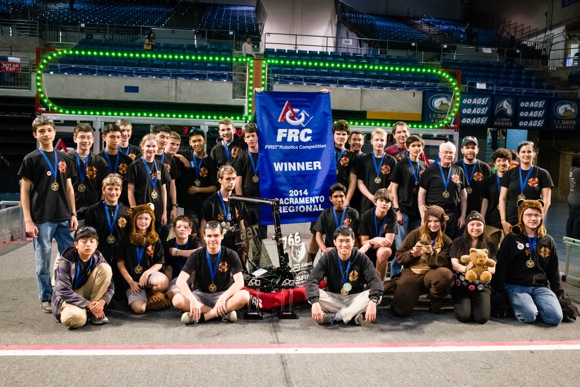 Menlo-Atherton High School took home the hardware, literally, with a first-place alliance finish at the FIRST Robotics Sacramento Regional Competition held at UC Davis this past weekend, March 13-15.  As part of the winning alliance, led by Spartan Robotics Team 971 of Mountain View High School and including Citrus Circuits Team 1678 of Davis, CA, Menlo-Atherton’s Team 766 has earned a spot at the national competition to be held in St. Louis on April 23-26.

Fifty-four teams competed this past weekend at the Sacramento Regional Event.  This year’s game, Aerial Assist, required teams to pass an inflatable exercise ball between robots and then shoot the ball into various goals and over a center truss spanning the playing field.  At the competition, teams play in alliances consisting of three teams.  During the qualifying rounds, the alliance assignments are random, and teams are ranked by performance.  On the final day, the top eight seeded teams draft their alliance from the remaining teams to form a 3-team alliance.  During the selection phase, Menlo-Atherton was chosen by Mountain View to play on their alliance with Citrus Circuits.  M-A was selected for their ball-passing and defensive skills.

With the alliance formed, they charged through the elimination rounds (a best 2-out-of-3 format to ultimately become the winning alliance.  M-A’s role was to inbound balls and pass to Citrus Circuits, then block for Citrus Circuits as they shot the ball over a truss to Mountain View, who would then shoot it into a goal.  It was the combination of the three separate team’s skills and teamwork (or “coopertition,” a term coined by FIRST Robotics), which ultimately resulted in the win for the alliance.

To see M-A’s bot in action, come to the Silicon Valley Regional on April 3-5 at the Event Center at San Jose State University.  Admission is free.

Learn more about M-A Robotics at www.team766.com.  M-A would love to welcome new sponsors to the team.  If you are interested, contact us throu