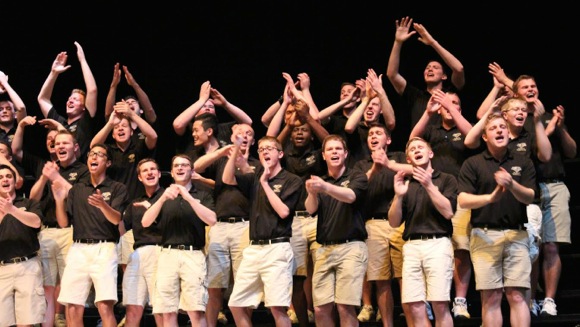 A number of Menlo-Atherton High School students were lucky enough to witness a special performance from the Purdue Glee Club, held in M-A’s Performing Arts Center on March 19.

Small talk was quick to fade as the students settled into their seats.. The singers ran down the aisles and spread themselves out all over the auditorium, creating a terrific introduction to their first song.

“Keep on smilin’, cause when you’re smilin’, the whole world smiles with you,” sang the Glee Club, as each member serenaded a girl in the auditorium with a beautiful rendition of the song When You’re Smiling, leaving the girls breathless and blushing.

Throughout their 50-minute performance, the Glee Club performed a variety of other songs, starting with Life is a Highway, and stretching all the way to Somewhere Over the Rainbow, ending with Purdue’s own original song, Hail Purdue.

A quick glance around the auditorium revealed a large number number of smiles on students’ faces. There were sophomores giggling about how attractive some of the singers were, while there were seniors with content looks on their faces, simply enjoying the show.  Junior Emmett Lee said the show “was really impressive” and that he especially enjoyed watching the Purdue guys serenade the M-A girls.

As the singers ended their last song, there was a quick moment of silence before bursts of applause broke out, and the audience gave them a standing ovation.