Mike Amoroso has been the Varsity baseball coach at Menlo-Atherton High School since 2007, but we were on campus to visit with him about classic cars, not classic swings. That’s because the 8th annual America’s Pastime Car Show, which benefits the baseball team, will be held this Saturday, April 19th, from 8:00 am to 2:00 pm. Admission is free. There will be muscle cars, race cars, vintage cars, trucks and motorcycles along with a BBQ.

“I want my players to work for the money that goes into the baseball program,” said Mike. “The Varsity team will be on hand to set up and help get the classic cars parked [in the school lot]. Then the Frosh team will come in and help with the BBQ and take lunch orders.

Mike grew up in Redwood City and played baseball at Woodside High School. Now at the rival crosstown school, he realizes that any baseball coach at M-A falls in the shadow of legendary coach Frank Bettencourt, in honor of whom the playing field is named. 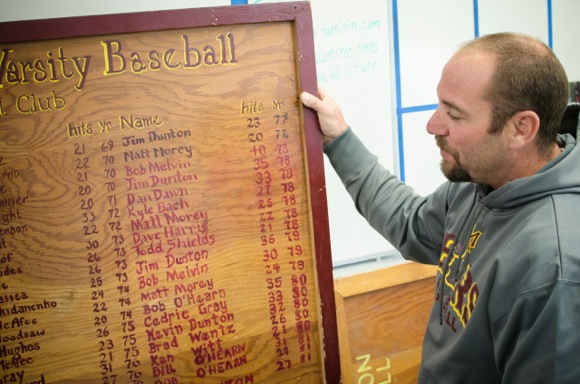 “All the years Bettencourt coached the team played home games at Flood Park,” said Mike. “He was a great baseball statistician. He’d draw up plays using stick figures and had all of these hand-painted record boards. I still have all his stuff in a closet.”

Mike has seen the baseball program grow at M-A: “This year we have 23 players on the Varsity and 28 on the Frosh-Soph team. The program is getting bigger — and that’s a good sign.”

As far as this Saturday’s America’s Pastime event, M-A parent Lisa Joos notes: “The Menlo-Atherton Baseball program has been fortunate to have been able to retain a tenured coaching staff in part due to the support of this fundraiser. The event is beautifully run, with the baseball team playing an integral part of its success. It’s a great opportunity for our community to come on campus, meet the team, see some amazing cars, and enjoy a BBQ lunch.”

Photos by Rebecca Flanagan; note the name Bob Melvin, current manager of the Oakland As, is on Coach Bettencourt’s chart of players who made the 20 hit club.