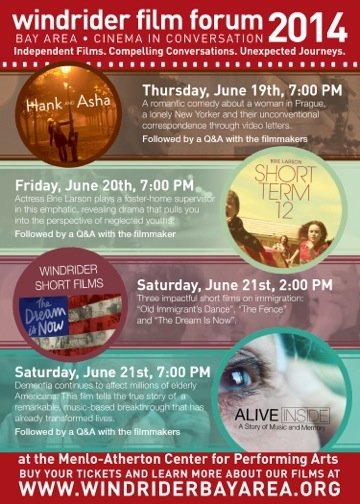 This year’s line-up of independent films will be screened  at the Menlo-Atherton Performing Arts Center.

Hank and Asha is the opening night film on Thursday, June 19, at 7:00 pm. It is the story of a friendship that develops in an unconventional way, through video correspondence. Both filmmakers, James Duff and Julia Morrison, will be on hand for the Q&A.

Short Term 12 will shown on Friday, June 20, 7:00 pm. This film won the both the Grand Jury Award and the Audience Award at the 2013 SXSW Film Festival, among many other awards. Filmmaker Destin will be there for the screening and the Q&A.

The closing night film will be Alive Inside – A Story of Music and Memory on Saturday, June 21, at 7:00 pm. This documentary won the Documentary Audience Award at Sundance this year. As dementia continues to affect millions of elderly Americans, it tells of a remarkable, music-based breakthrough that has already transformed lives. Both Michael Rossato-Bennett (Director, Writer and Producer) and co-producer Alexandra (Alex) McDougald will be available for the Q&A.

Saturday afternoon will feature short films on the theme of immigration:

Individual tickets for Windrider Film Forum are $15.00 for general ticket and $10.00 for a student ticket per show. Passes to come to the entire event are $50.00. Tickets are available on Windrider’s website or at the door.