When Todd Lavine graduated from Menlo School in 2008 and went off to Amherst “there was no way I was going to pursue a career as an artist,” he recalls.

But while at Menlo he’d gotten interested in photography, which was the focus of his senior project. Given that background, a photography class at Amherst beckoned. “If I hadn’t spent so much time on photography in high school, I wouldn’t have pursued it at college.

“At the same time, I saw kids who were artists struggle to get a job, so I got into teaching.”

But photography was not forgotten. He chronicled the kids he taught in a series of portraits where the subjects dictated the pose.

Later, he had a fellowship for a non-profit, and the lure of photography beckoned. “After six months of looking at art and going to openings, I realized, ‘oh yes, you need to be making art,’ even as I tried to scurry out of it and do something else,” he says. “I feel the most fulfilled and most purposeful and most alive when pursuing photography.” 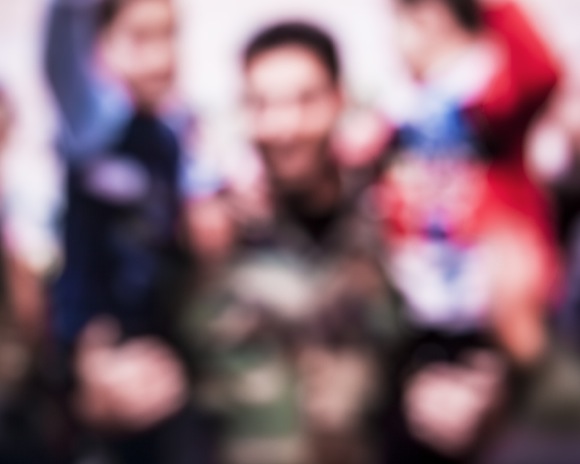 His most recent photos, which he considers a work in progress, are on display at the 1038 project space in San Francisco. The exhibit is titled A Transmission, Interrupted, and the notes explain: “Based on the Syrian Civil War and a key figure in the war, Abdul Razzaq Tlass, Lavine’s work examines the conundrum that results when war is reduced to pixels from a multiplicity of video images…A Transmission, Interrupted reassembles image fragments from video footage of Tlass into an opaque narrative… rather than trying to illuminate who Tlass was, [it] reassembles the two contradictory presentations of him… In one, he is a hero; in the other, he is a fraud.”

“I’m not approaching this as journalist,” explains Todd, who works out of a photo studio in Atherton. “Rather it’s more like ‘let’s step aside and look at how he’s represented and how these representations engage each other.’ I function as an outsider, as an interpreter, viewing him from a distance.”

About the photo chosen to accompany this post, he emails: “The photograph is titled “Free Syrian Army hero Abdul Razzak Tlass – O spirit of Athzna,” Ikhwan Cinema, uploaded March 1, 2012, 200,715 views. Photographs of soldiers holding children is common during wartime. When I saw Tlass utilizing this form of representation, I abstracted my image to reference the visual canon he was drawing from. I felt like he was trying to cast himself as a symbol rather than portray himself as an individual.”

Note: 1038 is open by appointment only; the show runs through June 21st.