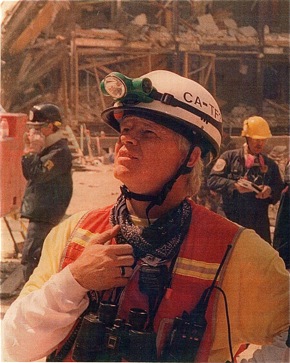 Jerry’s love of painting began after retiring from the fire service in 1996. He spent 30 years as a firefighter, the last ten as a Battalion Chief in the Menlo Park Fire Protection District. His career inspired his early work in acrylics, which featured fire engines, fire helmets and fire scenes.

For the past 15 years, Jerry has specialized in portraits, landscapes and still life paintings. He has a special fondness for painting old trucks in rural settings, blending the beauty of nature with the character and history of battered vehicles.

In addition to his vintage trucks, Jerry paints from photographs taken during his travels. His work includes scenes from Italy, Germany, Belgium, Egypt, Greece, England and Turkey, as well as from across the US and Canada. Throughout his artistic career, he has accepted numerous commissions for portraiture and landscapes.

Netherlands Windmills (24×36″, acrylic, 2014) by Jerry Peters;Photo of Jerry was taken at the Oklahoma City (Murrah Building) bombing in 1995. He was the Task Force Leader for Menlo Park’s Urban Search And Rescue (USAR) team.