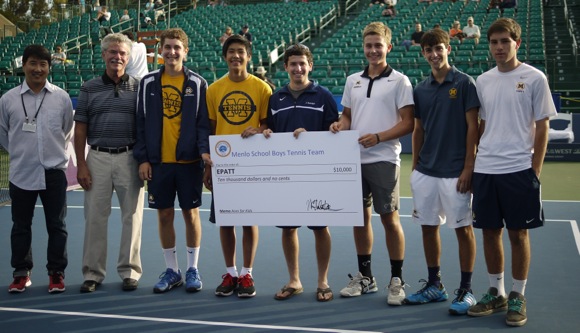 Nearly two months after the Menlo School boys’ tennis players brought home the NorCal team title, they gathered to make one more delivery. This time, they were at Stanford for the Bank of the West Tournament to present a $10,000 check for East Palo Alto Tennis and Tutoring.

On opening night of the tournament, the boys and Coach Bill Shine were brought to the court and thanked for their ace-athon, a fundraiser based on how many aces the players delivered during the season. Though several Menlo players were on vacation, six were on hand to present the check: Nate Safran, Jake Rudolph, David Roy, Kylee Santos, Michael Quezada and Lane Leschly, who drummed up the idea last summer.

Menlo players gathered sponsors — from friends,  family and businesses in the community — who pledged per ace or gave a fixed donation. The boys surpassed their goal of 100 aces with 345 for the season.

“It definitely blew by our expectations for both the amount of money and the number of aces, ” Leschly said. “Overall, it was a huge success with the team, and we’ve all gotten really engaged in the idea, so we’re hoping to continue the fun next year.”

EPATT is an afterschool program that provides youth development for students who are from local under-resourced communities. Since 1988, EPATT has been using academic tutoring, group tennis instruction, parent education and accountability to help students “make success a habit.”