In advance of community open house, Sara Jamison lets us in on some Allied Arts Guild secrets 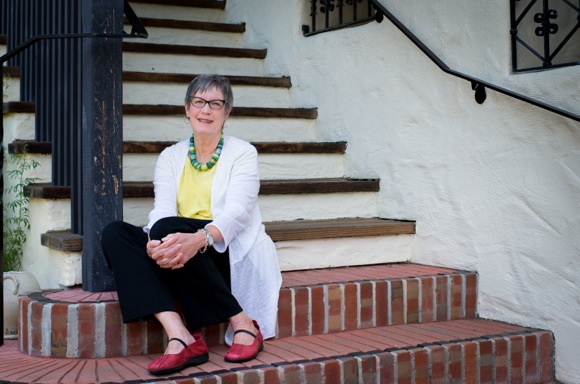 Sara Jamison spent her career in the Sunset magazine photo department and had known about the Allied Arts Guild and its picturesque setting since childhood. But it wasn’t until her retirement that she joined the Allied Arts Guild Auxiliary, which operates what is certainly  Menlo Park’s most iconic group of buildings.

We’d met her on the Guild grounds to talk about the upcoming community open house on August 23rd from 11:00 am to 4:00 pm as well as to refresh our memory about some of its history.

“I came here as a young girl for birthday parties,” she said. “Everyone loves the property and it’s for a great cause [the support of The Lucile Packard Children’s Hospital].

“This year marks the 10th anniversary of the renovation. So we decided to host an open house.”

Sara reminded us that two of buildings near what is now known as the Woodworking Barn once housed sheep. “The shed was one of the original buildings of the working ranch,” she said.

She also pointed out that the large “stones” in the walkways aren’t really stones, but rather poured concrete. “Delight [one of the four original owners] had grooves put in them so they would look older and like a wagon had been over them,” she explained. (Note the smaller stones are real and came from nearby San Francisquito Creek.)

As explained on the Allied Arts website: “In 1929, wealthy art lovers Delight and Garfield Merner bought 3.5 acres of the land located at the edge of Menlo Park, part of the Jeff Murray farm. Working closely with architect Gardner Dailey and artist Pedro de Lemos, they began to realize their dream of creating an arts guild in California. The Merners’ goals were to provide a serene, beautiful workplace for artists; to encourage the crafting of handsome objects for everyday use; and to support all peasant or folk art, especially that of early California.”

The Auxiliary has been “landlord, shopkeeper, supporter of the arts and protector of this historic site” since 1951. Members staff the Artisan Shop. There are a dozen additional shops on the property as well as the Blue Garden Cafe, which serves light refreshments and lunch. The Lucile Packard Children’s Hospital receives all profits from Allied Arts Guild for aid to critically ill children.

Sara said that people attending the open house will have a chance to find out more about both the Guild’s history and what it offers today. “We’ll all be wearing, ‘Ask Me’ buttons,” she said.