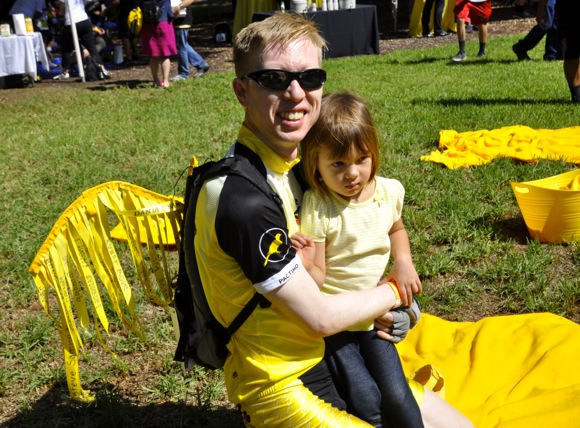 If you thought you spied winged beings riding bikes along the Alameda through Menlo Park this morning, you weren’t mistaken. Some of the cyclists who participated The Canary Challenge, which raised money for the Canary Foundation, did add wings to their backs. In the case of the man pictured above, those wings helped pull his  daughter behind him.

This is the third year the Canary Challenge has been held, and it reached its fund-rasing goal of $1 million.

The Canary Foundation was founded in 2004 by high tech exec Don Listwin who lost his mother to ovarian cancer. Explains the Foundation website: “He discovered that although almost $10 billion is spent annually on cancer research in the United States, the vast majority is allocated to developing new cancer treatments and caring for patients.

“Surprisingly, little funding is available to researchers investigating new ways to detect cancer at its earliest, most curable stages. He came to the realization that one of the most promising cures for cancer was relatively unexplored and severely underfunded – early cancer detection research. As a result, he made a lifelong commitment to leverage his resources and expertise to build the first non-profit organization dedicated solely to the funding, discovery, and development of tests for early cancer detection.”