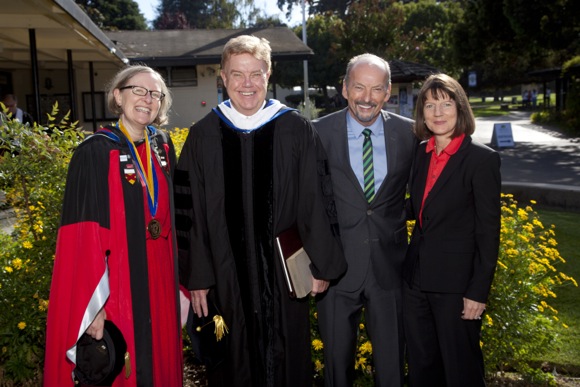 At his inauguration as Menlo College’s 10th president earlier this month, Richard A. Moran said he was “humbled and honored,” and promised to fulfill his new duties “faithfully and to the best of his ability.” He confided that he set his sights on becoming a college president when he was 18 years old. As a teenager, he purchased a book about college presidents at a library book swap for a quarter. He then displayed the book he has held on to all these years for the time when it would come in handy (although he acknowledged that as the book was published in 1917, it might not be all that useful today).

The president asked the audience to think of our small inclusive community as a place to “make Menlo more Menlo.” He rallied the community to work together and be proud. He said the campus should think of Menlo College as more than a hidden gem. Menlo College should be held as a leader in Silicon Valley. He concluded that we should keep striving to make the College a better place.

Menlo College was recently named “A Best In The West” by The Princeton Review for the sixth year in a row.