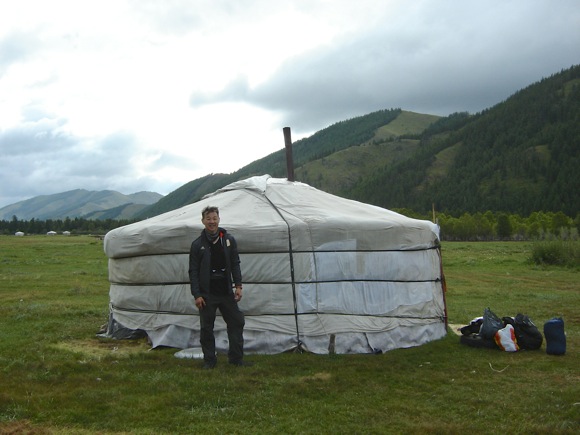 Menlowe Ballet’s fall season at the Menlo-Atherton Performing Arts Center features contemporary, classical and cultural ballets including the world premiere of Artistic Director Michael Lowe’s Legend of the Seven Suns, which brings to life a traditional Mongolian folktale. Also included are Dennis Nahat’s In Concert and Lowe’s Plague. Performances are Saturday, Nov. 8 at 2:00 and 8:00 pm; Sunday, Nov. 9 at 2:00 pm; and Saturday, Nov. 15 at 2:00 and 8:00 pm. Tickets range from $28 to $49 and can be purchased online or by calling (800) 595-4849.

Lowe traveled to Mongolia to research his new cultural ballet. The ballet’s characters include gods, mortals, a menagerie of engaging animals, and Mongolia’s vast, rugged landscape. “Mongolia has a rich heritage of tales related to humans and their relationship to the natural world,” he said. “These stories give me the fuel I needed to tell a great fable through dance.” 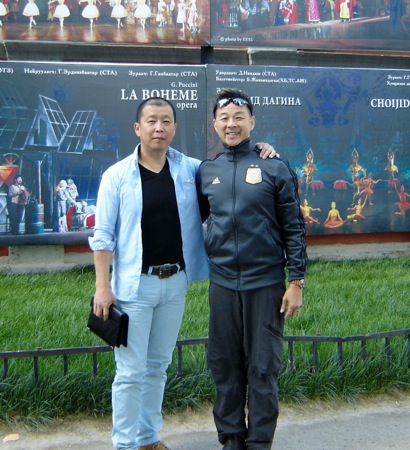 Lowe spent part of his time “on the land” with the Terlij Villagers (top photo). The second half of the trip was spent in Ulaanbaatar with the Director of the Great Khan Theater, D. Dashlkhagva (pictured with Lowe right), and his dancers teaching Lowe traditional Mongolian steps.

Lowe reflected on his experience:”… I had chosen to embark on a strenuous tour that would take me out of Mongolia’s capital city into rugged, remote terrain where I would experience the tastes, sounds, smells, and realities of the nomadic way of life which was to be the setting for my new ballet.

“As the only senior amidst a group of adventurous, brave, twenty-somethings, I slept for a week bundled against bitter cold in a tent-like ger, with no shower or running water, and only a river to bathe in; chopped wood to keep a fire burning through the night; subsisted on meat from a freshly slaughtered goat; traversed hours by foot up a vertical mountain; travelled elsewhere by oxcart; rode wild, just-tamed horses; and survived a terrifying, yet exhilarating trip, carrying all of my gear on the back of a local’s motorcycle as he precariously navigated rivers and rutted muddy roads in order to get me back to the city.

“Upon returning home, I began planning how I might make this fable come alive through dance. The night before the first day of rehearsals were to begin with my company, I noticed a feeling of trepidation within me similar to what I had felt prior to leaving on my trip. Upon reflection, I realized that this anxiety is present in me each time I embark on a new choreographic project.

“Walking in to face a studio full of expectant dancers who are all looking to me to give them steps and characters to inhabit is a daunting experience. As a choreographer, I don’t go into every rehearsal knowing exactly what I’m going to do. The act of creating art often involves intense preparation paired with a willingness to allow spontaneous ideas to take form. The important thing is to take the initial step and begin the journey into that very process. For me, it’s always been that first step through the studio door onto the dance floor, or off of the airplane onto foreign ground, that has allowed the magic to begin.”

Based in Menlo Park, Menlowe Ballet is a professional ballet company dedicated to bringing dance to audiences in the San Francisco Bay Area. Founded in 2011, the company performs works ranging from cultural to contemporary, while honoring the tradition of classical ballet. In addition to its artistic mission, Menlowe Ballet provides performing opportunities to aspiring students from its official school, the Menlo Park Academy of Dance.