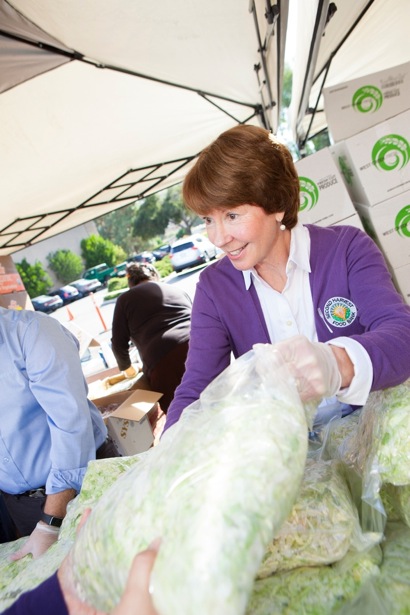 To ensure that anyone who needs a meal can get one this holiday season – and all year long – Second Harvest Food Bank of Santa Clara and San Mateo Counties has kicked off its Holiday Food and Fund Drive with the goal of raising $15 million and 2 million pounds of food.

“We are continuing to see unprecedented need,” said Atherton resident Kathy Jackson, CEO of Second Harvest Food Bank of Santa Clara and San Mateo Counties (pictured above). “The economy is rebounding, but the cost of living is soaring, making it difficult for many of the families we serve to get by.”

The average apartment rent in Silicon Valley has risen more than 10% in the last year, which leaves less money for food each month. It takes more than $82,000 per year for a family of four to pay their bills and put food on the table. Yet according to a recent study on local hunger, the vast majority of households served by Second Harvest have an annual income of $20,000 or less.

“One of the most heartbreaking parts of the study was learning about some of the strategies people use to feed their families,” Jackson said. “About two-thirds of our clients purchase cheap, unhealthy foods to make ends meet. They know the food is unhealthy, but it’s what they can afford. That’s why Second Harvest has put so much emphasis on making sure people have access to nutritious food, including fruits and vegetables. More than half the food Second Harvest distributes is fresh produce. In fact, Second Harvest distributes more fresh produce than any other food bank in the country.”

Half of Second Harvest’s clients report eating food past its expiration date, a third water down food and drinks, and nearly a quarter sell or pawn personal property so that they can eat. Nearly 250,000 people rely on Second Harvest for food every month, and more than half are children and seniors.

Individuals, corporations, and organizations can help to ensure that anyone who needs a meal can get one by donating to Second Harvest Food Bank or hosting a food and fund drive this holiday season. To support the campaign, visit http://www.shfb.org or call 866-234-3663. Anyone who needs food should call Second Harvest’s Food Connection hotline at 800-984-3663.