This year M-A broke records by raising just over 201,475 can, exceeding the Canned Food Drive goal of 200,000 cans, which “was set to be outrageous,” notes leadership teachers Jonathan Senigaglia and Mike Amoroso.

“I’m really proud of the school. People sometimes say that M-A doesn’t have a lot of spirit, but I point to that number and say M-A has school spirit when it matters… Maybe the senior class doesn’t dress up every year, but they bring food to feed hungry people, and that’s all that really matters,” says Senigaglia.

Last year’s goal of 100,000 cans was set as something Amoroso and Senigaglia thought the school could to aspire to but were blown away when the school far surpassed that goal by raising 159,000 cans. This year, the goal was doubled and again surpassed, proving that it truly is “like a whole movement. The school comes together once a year for this amazing thing,” describes Senigaglia.

As a grade, the junior class contributed the most to the drive, followed by the seniors, sophomores, and then freshmen. English teacher Shannon Kirkpatrick’s third period class raised the most cans at 39,331. Biology teacher Patrick Roisen followed in second with 14,090, and Jenny Green-Heffern (G-H) and her class placed in third with 9,196. 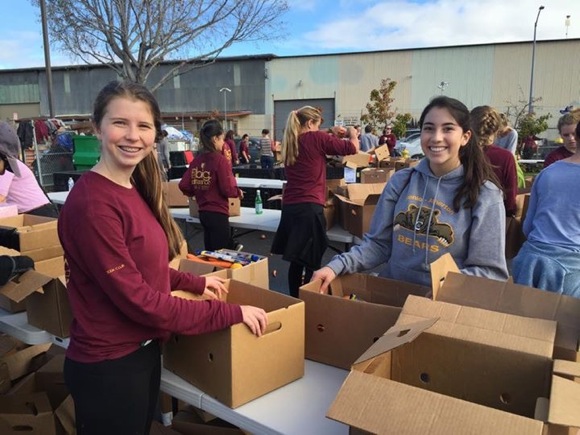 The statistics of the exact amount of money and cans raised separately are still being determined by the leadership class, but $12,000 were spent purchasing fresh food and chickens for families. This year, the students raised more money than ever, allowing for more purchases from Grocery Outlet. Senigaglia recalls that 900 chickens, 2,800 bags of frozen vegetables, 600 bags of potatoes, 400 bags of onions, 400 bags of apples, 400 bags of tangerines, and 500 containers of oatmeal were bought with just a fraction of the money raised.

While there has been some controversy over whether the drive should be money- or canned-based, it is important to remember that the end goal is simply to feed families in need. Senigaglia says that “to me, cash means fresh food. You bring in more dollars, and I will buy more fresh food.” The integrity of the drive is not lessened by an increase in money donations, and all donations regardless of size or type should be welcomed, not discouraged.

Because of this, Senigaglia is thrilled with the spike in monetary donations, and Amoroso speculates that despite this increase, students are bringing in just as many cans as before. If anything, more students have participated in canning than in the past, and both leadership teachers recall the stampede of students to sign up on the Canning Wall once the calendar was posted in room B-21.

This year’s Distribution Day, hosted at Ecumenical Hunger in East Palo Alto on the morning of Dec 6, was a huge success. That day, students aided an estimated 400 families, with the help of 100 M-A volunteers in addition to the leadership students. This year’s process was quite a bit different than those of years in the past because the Second Harvest Food Bank sent food that was not sorted into food groups for the first time. Because of this, volunteers spent extra time separating food into different categories to ensure that each family receiving donations would get an appropriate amount of each type of food.