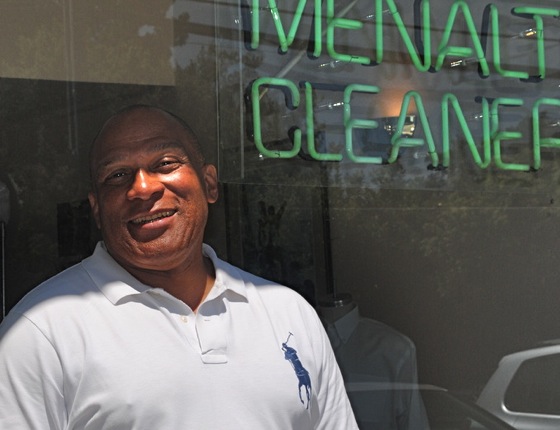 The Menlo Park Police Department issued an arrest warrant this morning for the owner of Menalto Cleaners, Edwin Gary Smith, 63. The warrant is for 40 felony counts that include violations of California Penal Code sections: 530.5-identity theft, 484(g)-credit card fraud and 368(e)-elder fiduciary abuse. The bail on this warrant is set at $500,000.

This afternoon the suspect was taken into custody without incidence in front of his residence in the 400 block of O’Connor Street in Menlo Park. Suspect Smith was transported to the Menlo Park Police Department for processing and eventually booked into the San Mateo County Main Jail.

In September of 2014, the Menlo Park Police Department was advised of an alleged large scale theft by credit card fraud at a local business. This investigation uncovered seven known victims with a combined loss of over $200,000.

On October 7, 2014, Menlo Park Police officers and detectives served simultaneous search warrants at Menalto Cleaners located at 1921 Menalto Ave., and a residence in the 400 block of O’Connor Street in Menlo Park. Numerous items of evidence were seized pursuant to these search warrants. Investigation at that time indicated a possibility of 30 additional victims in this fraud with losses in the hundreds of thousands of dollars.

The investigation was concluded in late December of 2014 and found that 38 separate victims had been defrauded of over $678,000 from December of 2011 to October of 2014. The victims had all been clients of Menalto Cleaners, and were overcharged large amounts on their credit card accounts.