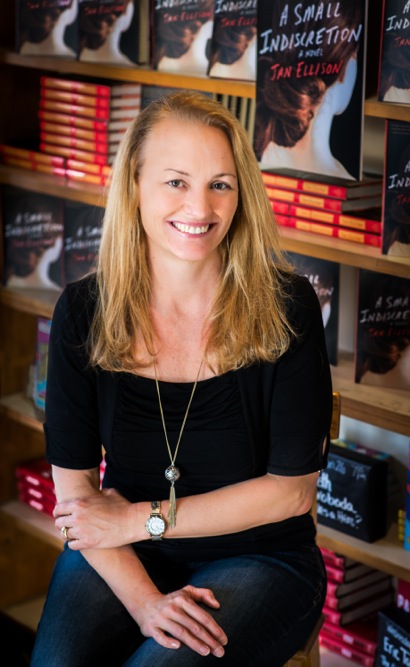 When she first started writing, the current front window display in Kepler’s Bookstore would have been all but inconceivable to Jan Ellison. A Small Indiscretion, a newly-published novel out of Random House, is showcased in artful stacks, with Jan’s name splashed across the covers. It’s definitely the stuff of a fiction writer’s dream, especially a mother of young children trying to eke out precious time for her craft.

“In the beginning, it was literally six hours a week,” Jan recalls. “I’d drop the kids at Ladera preschool Monday, Wednesday and Friday. I’d get to Starbucks at 9:15 am and leave at 11:15 am. That’s when I wrote. I’ve never had writer’s block in my whole life because there just hasn’t been time.”

On Tuesday, January 27, Jan will be the featured author at a 7:30 pm Kepler’s Reading and Book Launch Party.

According to Jan, the inspiration for A Small Indiscretion actually dates back to her college days. After growing up in Southern California, she attended Stanford University for two years and then took some time off. “I went to Paris and then to London and got a job. The whole time I was kind of keeping notes, and those notes are the genesis of this novel,” she says. “It was really just trying to capture that moment when you’re away from home and you realize your life is your own for the first time.”

A Small Indiscretion is Jan’s first published novel but not her first recognized work. Back in 2007, her first published short story won the O.Henry Prize, a prestigious award given to the year’s 20 best stories. Her next project turned out a bit differently than expected. “I thought I should write a collection of short stories, sat down to write this short story set in London, a coming of age story,” she recounts, “and seven years later, I finished it and it was a novel.”

That novel is already drawing positive reviews with Jan being hailed as a “major new voice in literary suspense.” Jan describes the hook for the book as an old obsession that hijacks a family’s happiness. “If you close your eyes and think back to when you were 20 what stupid thing you did that if it somehow came back to haunt your current life, and that’s what happens. It’s really about a woman’s attempt to see the past clearly and make amends and let it rest,” she says.

Jan lives in Portola Valley with her husband, David Baszucki, whom she met at Stanford, and their four children, now 18, 16, 13 and 10. With book promotion and events kicking into high gear, she finds herself tapping into that same intense efficiency that helped her through the early years. “It has been great but also a little overwhelming. It’s a whole other job, and I still have those four kids,” she says with a smile. Jan’s upcoming appearances include stops in San Francisco, Manhattan Beach and Bellingham, Washington.