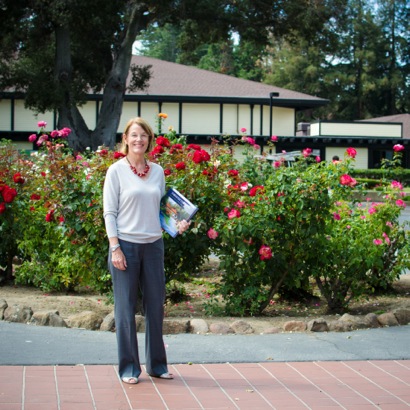 Whether or not you have ever set foot on the Menlo College campus in Atherton, you can learn about its 85-year history when Pam Gullard, author of Through the Gates, discusses the college’s past, present, and future with the new president, Dr. Richard Moran at Kepler’s Books on Thursday, Feb. 19.

The event will begin with a 7:00 pm reception where all community members are invited to partake in food and drink and mingle with alumni to hear their Menlo College stories. At 7:30, Pam will share some of the most interesting stories from Menlo College over the decades, accompanied by previously unseen, historical photographs. For instance, did you know the first two members of the Kingston Trio met in class while one slept behind a textbook?

President Richard Moran will speak about the far-ranging research that faculty members are conducting. Examples of the breadth of research pursued by Menlo faculty include a history of U.S. immigration policies, corporate acquisition practices in India, Super Bowl advertisement strategies, moral development in corporations, and more. President Moran will also discuss future plans for the college, which will celebrate its 100th birthday in 2027.

What was originally created as a steppingstone for all-male, mostly wealthy students, is now a four-year, coed college that offers business and psychology education programs grounded in the liberal arts.

Pamela Gullard has written three histories of California towns, showing in microcosm how the booming California economy of the 19th century led to the development of Silicon Valley. The latest history is Under the Oaks: Two Hundred Years in Atherton. She teaches personal narrative and a class looking at the short story as literature at Menlo College.

Richard A. Moran was named the 10th president of Menlo College in July 2014. His career includes serving as a venture capitalist and consultant to Fortune 500 companies, as well as taking an active role in the education community in the Silicon Valley and beyond. His most recent book is titled Navigating Tweets, Feats and Deletes.