What was on citizens’ minds at recent “Coffee with Kirsten” 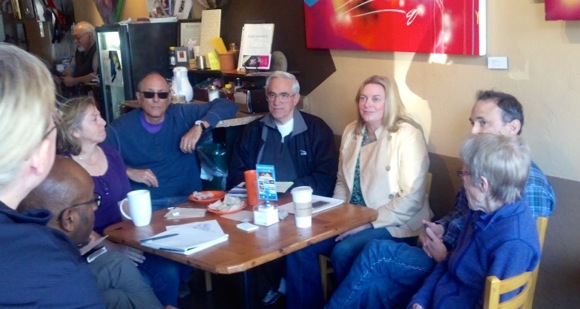 Menlo Park City Council Member Kirsten Keith recently held a community meeting entitled “Coffee with Kirsten” at the Willow’s coffee shop, Cafe Zoë. Approximately 18 people attended to discuss whatever was on their mind. There was no pre-set agenda; instead members of the public brought their ideas, questions and concerns about Menlo Park.

Many topics were discussed, such as the Caltrain intersection at Ravenswood, the Dumbarton rail, Sunset Publishing’s unique property, bicycle lanes both downtown and on Santa Cruz Avenue to Hillview School, various properties being developed, and the General Plan in the M2 area.

Out of the area topics were also discussed, with ideas from Palo Alto, Redwood City and as far east as Boston, Mass. In Boston, an innovative topic entitled “Mass Challenge” was suggested as something Menlo Park might want to consider.

Kirsten plans to offer a follow-up meeting next month, as part of what she calls “Coffee with Kirsten.” She encourages residents to feel free to contact her anytime at (650) 308-4618 or email her at kkeith@menlopark.org.